Russian President Vladimir Putin is accusing Canada of playing “unconstructive political games” by passing its own Magnitsky law this week.

Putin made the comments in Sochi at an international forum in which he fielded a wide range of questions.

The Russian embassy in Ottawa has posted a transcript of his remarks on Twitter.

The embassy has already said that Parliament’s unanimous adoption this week of a Magnitsky act will cause irreparable harm to Canada-Russia relations.

The law targets the actions of gross human rights violators in all countries.

Canada’s new sanctions regime and those of other countries, including the United States, have been closely linked to the Russian whistleblower Sergei Magnitsky, who died in a Moscow prison in 2009 after accusing officials of a $230-million tax fraud.

“What do I think about what you have just said, about Canada joining or wanting to join, or about somebody else wanting to do it?” Putin said Thursday.

“These are some very unconstructive political games over things, which are in essence not what they look like, to be treated in such a way or to fuss about so much.”

Putin was responding to a question posed by a Carleton University professor who specializes in Russian affairs.

“Many countries have announced that they are ready to support this law too,” said Piotr Dutkiewicz, former director of the Institute of European and Russian Studies at Carleton. “Are you not worried about the consequences of this process? Would you mind commenting on this fact?”

Liberal MP Bob Nault, the chair of the House of Commons foreign affairs committee, said earlier this week there’s no need for Russia to take personal offence to the passage of the new law.

“Unless you have a reason to take things personally,” the veteran MP added in an interview with The Canadian Press.

In a report, earlier this year, the all-party committee unanimously approved passage of the Victims of Corrupt Foreign Officials Act. 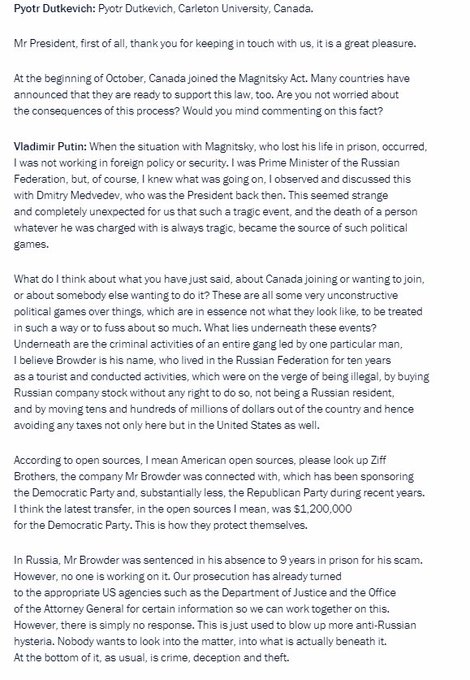 Canada’s inflation is up, but retail sales are down

Eight months after all citizenship tests were cancelled, Canada is now making the test available online. Immigration, Refugees and...