An armed man who took hostages in a supermarket in southern France on Friday, killing three and injuring at least a dozen others, was shot and killed by French police. The man pledged allegiance to Islamic State during the standoff, and Islamic State later claimed responsibility for the attack. Authorities, however, described the gunman as a small-time criminal with no known terrorist links.

An unnamed French lieutenant colonel emerged as a hero in the attack after volunteering to take the place of one of the hostages. The 44-year-old officer was able to leave his cellphone switched on during the incident, establishing contact with officers outside the supermarket.

The officer, however, was seriously injured when French special forces stormed the market, fearing the gunman was about to kill more people. Events began to unfold early Friday when anti-terrorist forces scrambled to the Super U supermarket in the sleepy town of Trèbes near Carcassonne in the south of France after a gunman hijacked a car after shooting both occupants.

The man, identified as 26-year-old Redouane Lakdim, drove off in the stolen vehicle and after a few miles, tried to ram the car into a group of police officers playing football before pulling out a 9 mm gun and opening fire, authorities said. Police said one officer was struck in the chest, the bullet shattering several ribs and puncturing his lung.

Police said Lakdim then drove to the supermarket, where witnesses told police he ran inside and pledged allegiance to Islamic State. Witness said he yelled, “You are killing people in Syria, now you’re going to die,” before shooting and killing a store employee and a customer.

The gunman, authorities said, demanded the release of Salah Abdeslam, believed to be the only surviving member of the terrorist commando group that carried out a series of shootings and bombings in Paris in November 2015 that left 130 people dead and hundreds more injured. 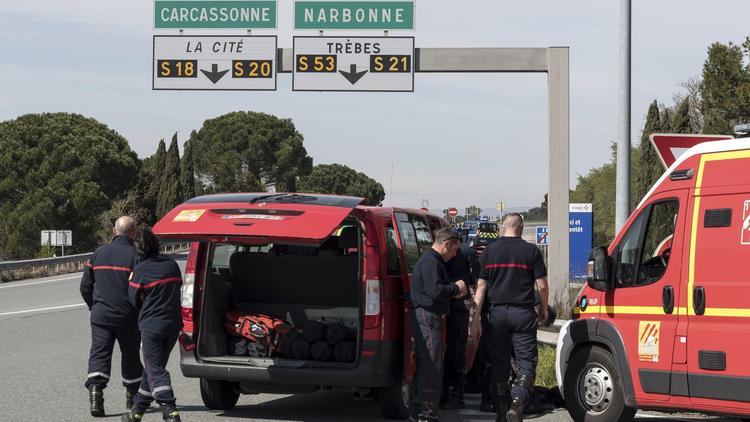 French police and firefighters secure the entrance to the town of Trebes, in southern France, where an armed man took hostages in a supermarket. (Jean-Paul Bonincontro / Associated Press)

During the four-hour standoff between the gunman and officers with the special tactical unit Groupe d’intervention de la Gendarmerie nationale, the gunman agreed to the lieutenant colonel’s offer to swap places with one of the hostages.

Interior Minister Gérard Collomb called it an exceptional “act of heroism” on the officer’s part and a break in the fast-moving incident. With the officer’s phone switched on, those outside were able to detect what was going on in the market. Special forces stormed the building after hearing renewed shooting in the market.

Collomb, who visited the scene, said the gunman apparently acted alone. He described the man as a small-time criminal. Collomb said he was known to intelligence services, but there was no suggestion he had been radicalized or was about to carry out a terrorist act. His comments conflicted with initial police reports that the suspect was on a list of those vulnerable to radicalization.

Speaking in Brussels, where he is attending a European Union summit, French President Emmanuel Macron offered his “full support” to everyone involved in the situation and said he would return to Paris in the coming hours. He also singled out the officer who gave himself up as a hostage. “He saved lives and did honor to his weapon and our country,” Macron said. “He is between life and death, and all our thoughts are with him and his family.”

Macron said French officials are investigating Islamic State’s claim that it was responsible for the attack. France, he said, already had paid a high price “in blood” for several terror attacks. France has been on high alert since a string of Islamic extremist attacks in 2015 and 2016 that killed more than 200 people.

Christian Guibbert, a former police officer, was shopping in the supermarket with his wife when he heard shots. He told news organization BFMV that he hid his wife and several other customers in a walk-in refrigerator in the store before trying to escape through an emergency exit.

Guibbert said the gunman had seen him hiding, so he ran. He escaped just as police were arriving. “I saw one person on the ground and a person who was extremely excited who had a handgun in one hand and knife in the other and was shouting, ‘Allahu akbar,’ ” Guibbert said. “He was very agitated. I knew at once it was a terrorist. He shot several times in the air.”

A group representing the Canadian airline industry says it is disappointed that the federal government did not include a...