‘We need to change, we need learn to live together in more respectful ways … what does that look like?’

Young people on P.E.I. are exploring the theme of reconciliation as part of a national competition called Imagine a Canada, organized by the National Centre for Truth and Reconciliation.

“The idea behind Imagine a Canada is to celebrate youth visions of the future of the country through a lens of reconciliation,” explained Ry Moran, director of the National Centre for Truth and Reconciliation at the University of Manitoba. 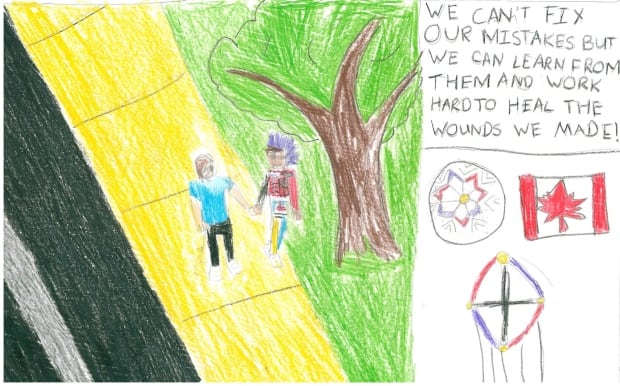 This drawing was created by Daniel FitzGerald who’s in Grade 5 at Stratford Elementary School. (National Centre for Truth and Reconciliation)

“What we’re trying to do is stimulate conversations in classrooms, amongst and between students, between students and teachers on where we are as a country right now and where we need to go.”

Students could enter by creating a story, poem, piece of art, short film or essay. They could enter from kindergarten through undergraduate at post-secondary institutions.

‘We need to change’

Five P.E.I. finalists, or honourees as they are called, will attend an honouring ceremony at Government House in Charlottetown on May 16. One of them will go to Ottawa for a national ceremony in June.

The five P.E.I. finalists are:

Murray was also the winning honouree from P.E.I. in 2016.

Moran says the idea for Imagine a Canada came out of the Calls to Action from the Truth and Reconciliation Commission. 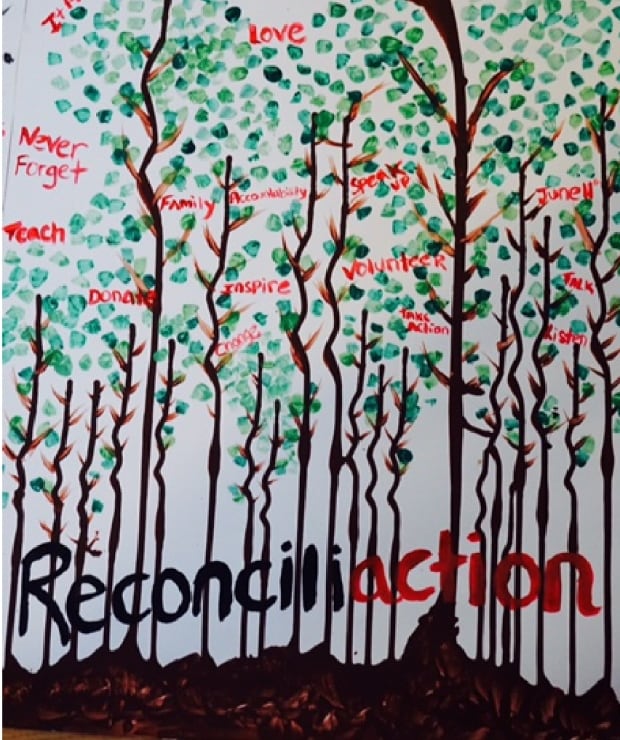 This is the second year in a row that Neveah Murray is one of the honourees from P.E.I. (National Centre for Truth and Reconciliation)

“We need to change, we need learn to live together in more respectful ways,” said Moran.

“So we’ve turned to young people across the country to ask them, what does that look like?” 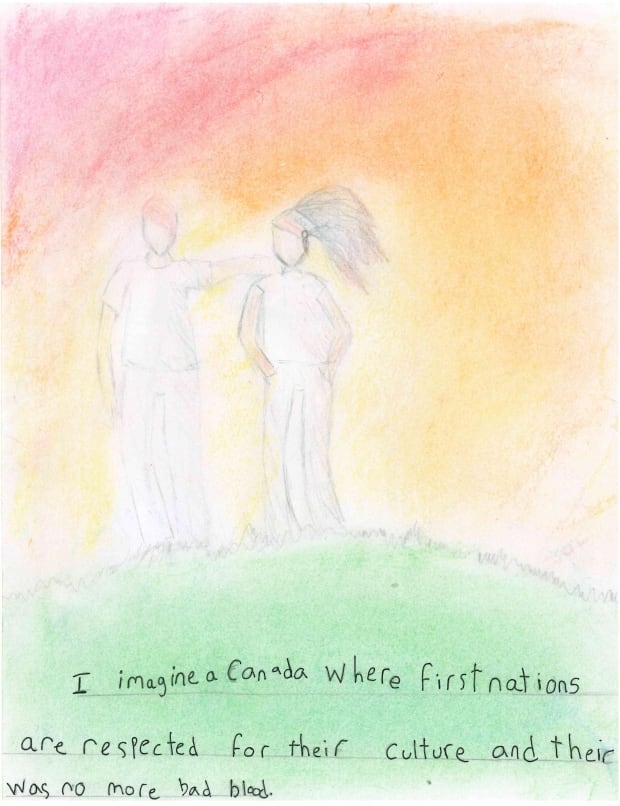 Nathan MacIntyre’s submission to the Imagine a Canada competition. (Submitted by the National Centre for Truth and Reconciliation)

“It shows that we’re best friends,” MacIntyre said about his drawing, agreeing there should be a better relationship between Indigenous and non-Indigenous people.

“I think that’s a great idea and it should be happening right now.” 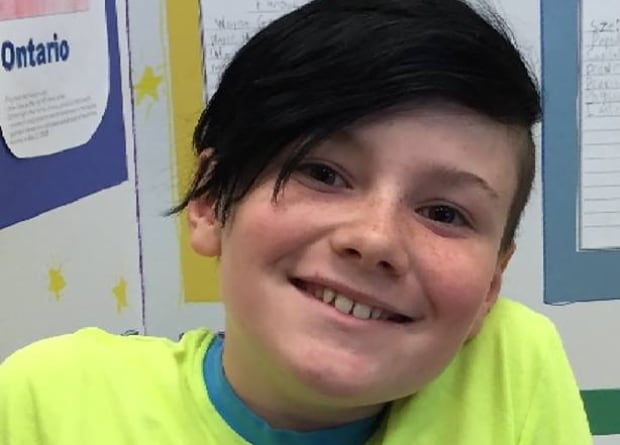 Nathan MacIntyre is a Grade 5 student at Stratford Elementary who is excited to attend the honouree gathering at Government House. (Submitted by Paula MacIntyre)

Mullen said residential schools have made an impression on her. Her classmates include students from the nearby Mi’kmaq community at Scotchfort.

“We took their culture from them,” she explained. “I learned about the schools they were forced to go to and they were taken from their families at a really young age.”

She is eager to learn more about First Nations culture.

“At our school we have a celebration where people come to sing and dance,” she said. “It makes me feel happy.” 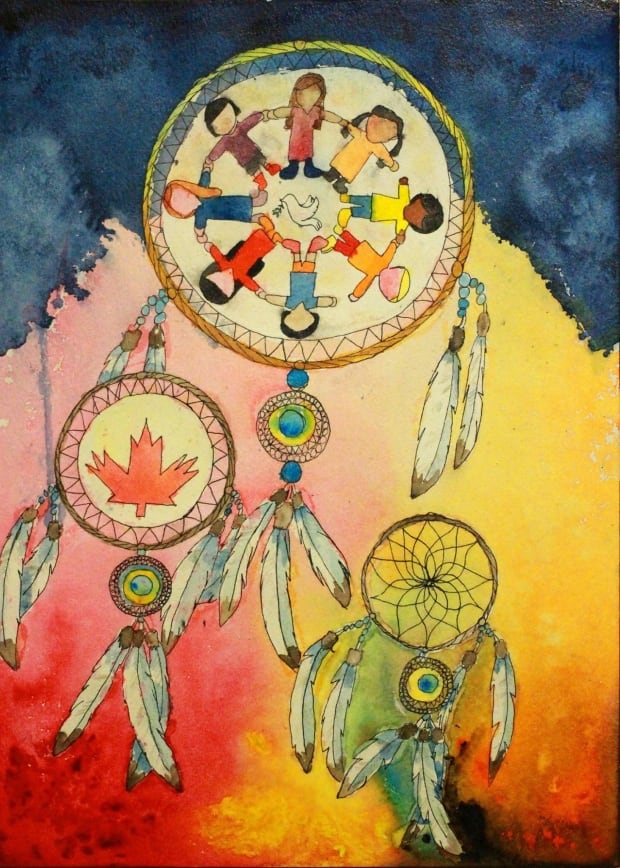 ‘A great heart for justice’

Stratford Elementary teacher Donna Wigmore has two students from her Grade 5 class who will be part of the honouring ceremony.

She did a mass blanket exercise with her Grade 5 class, which is an activity designed to help people see history through the eyes of Indigenous peoples. 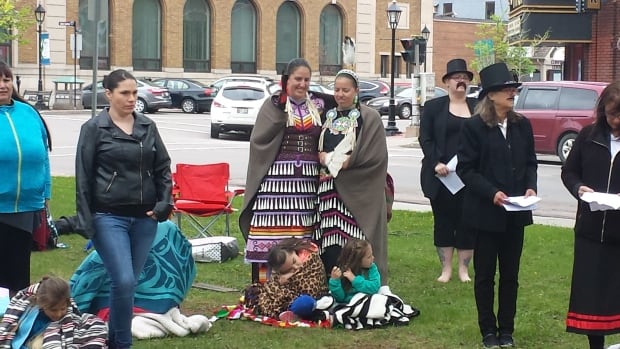 “They have a great heart for justice and to hear what our First Nations people went through at the same age that they are at, or even younger, really resonated with them.”

They are the future

“I think that what’s so heartening about the whole conversation that we’re having about the future of the country is that really it’s these young people that are the ones that are really going to make the real change,” said Moran. 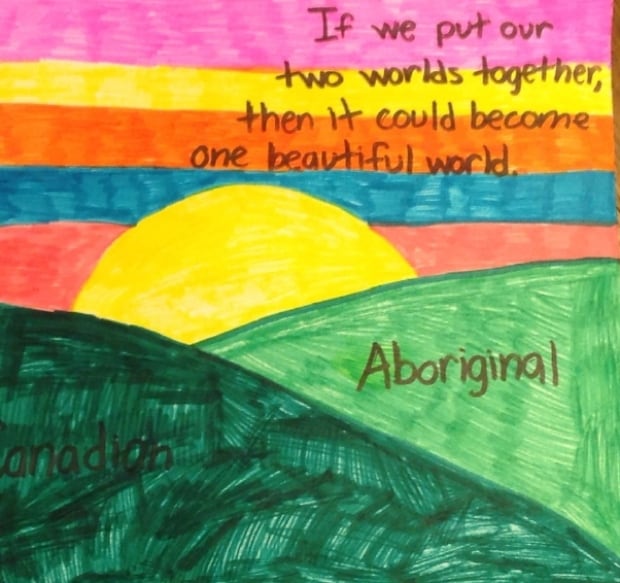 This drawing was created by Lily Jay who’s in Grade 4 at Mount Stewart Consolidated School. (National Centre for Truth and Reconciliation)

“They’re the ones that are going to be walking this path of reconciliation the longest in this country and that’s in a way a big responsibility.”

Last year was the first for Imagine a Canada, and the plan is to continue on an annual basis. 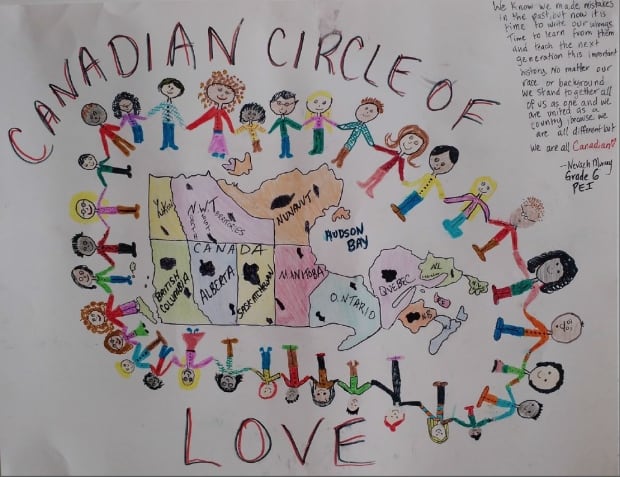 A group representing the Canadian airline industry says it is disappointed that the federal government did not include a...