U.S. investment bank Goldman Sachs says there’s an almost one in three chance of Canada’s housing market going bust in the near future.

The warning comes with a fairly large proviso, however, in that the bank’s view a housing “bust” is based on the equivalent of a house price decline of as little as five per cent. A larger correction is on the table but in Goldman’s eyes, even a relatively minor drop of five per cent would qualify.

Canada refuses visas to over a dozen African AI researchers

In a recent report, the bank looked at the housing markets of what it calls G10 economies, those with the most heavily traded currencies in the world — a list that includes the loonie, the yen, the pound, the Swiss franc and many more.

The eurozone is included in the bank’s calculations as one entity, and because it is made up of such a wide variety of countries and economies, average scores for the eurozone show nothing alarming.

That’s not true of the rest of the list, however. After grading factors such as overbuilding, mortgage debt levels and prices, the bank figures that New Zealand’s property market has a 40 per cent chance of correction, followed by Sweden at 35 per cent. Canada places next, with what Goldman Sachs deems a 30 per cent chance of going bust.

“Prices do appear overvalued and credit growth has been high,” Goldman Sachs says of the housing market in Canada, “traditional warning signs of real house-price declines.”

As has been the case in many countries, Canada has been undergoing a housing boom since the recession of 2009, with average house prices up by more than 40 per cent in nominal terms since 2010.

That’s not as high as some other places, but prices aren’t the only problem. Goldman singles Canada out for having a higher than usual percentage of its GDP tied up in residential real estate, and also for its current pace of homebuilding, which is roughly twice as much right now as demographic demand would warrant.

Add it all up and “house prices indeed look quite high for several of the small open G10 markets” including Canada, Goldman says.

The report authors at Goldman aren’t the only ones who think so.

Eric Lascelles, chief economist at RBC Global Asset Management, said in a recent report that he thinks the likeliest outcome for Canada’s housing market is a situation in which “gains slow to a snail’s pace or even go sideways.” 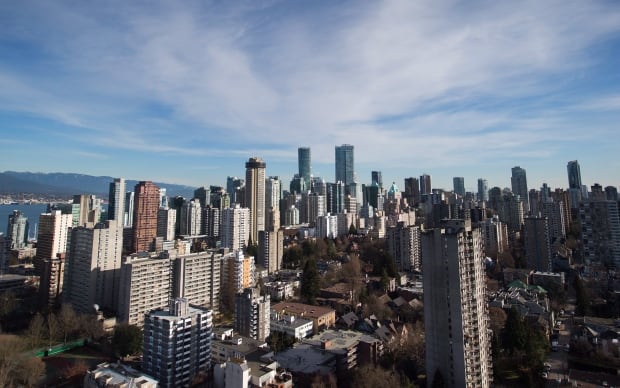 One management consultant says the real issue is in cities like Vancouver, pictured here, and Toronto. (Darryl Dyck/Canadian Press)

He says there’s a 40 per cent chance of that happening, slightly higher than the 30 per cent odds he ascribes to the boom continuing unimpeded.

“So long as interest rates remain low and the unemployment rate is declining, this boom could endure,” he says.

He says the likelihood of a correction, meanwhile, is about where Goldman Sachs deems it to be: 30 per cent.

“Home prices could justifiably fall fairly far,” he says. “This would unleash a period of quite weak economic activity in Canada.”

Mark Satov, strategy adviser and founder of management consultancy Satov Consultants, says in any discussion about Canada’s inflated housing market, a subtle but important distinction tends to be often overlooked.

“We’re not talking about Canada,” he told the CBC in an interview. “I’m not worried about the Saskatoon housing bubble — we’re worried about Vancouver and Toronto and the large percentage of the value that’s in those two cities.”

When house prices are compared to other world cities in terms of income levels, both Toronto and Vancouver are still downright affordable, Satov says. And there’s  little evidence that there’s any sort of housing bubble outside those two markets.

Even if prices do crater, it’s not necessarily a catastrophe, he says. “I’m not sure that much happens,” in terms of a panic, because people’s reaction may well be beneficial in the long run.

A sharp pullback in prices would mean some people on the outside waiting to buy in may be able to, and some people who were thinking of selling for a quick profit would likely stand pat. Other likely outcomes would be a preference for smaller, cheaper housing in the first place, and “abandoning the myth that owning a home is the ultimate dream,” Satov says

“I am not that worried about it.”

Seven Defining Moments That Shaped Canada in The Last 150 Years

The president of the Canadian Labour Congress is hoping Joe Biden’s efforts while in office will put pressure on Canada and the...