At Least 59 Killed in Las Vegas Shooting Rampage, More Than 500 Others Injured

At Least 59 Killed in Las Vegas Shooting Rampage, More Than 500 Others Injured

Perched in his suite at a high-rise hotel overlooking the Vegas Strip, a 64-year-old retiree with no real criminal history and no known affiliations with terror groups rained bullets down into a crowd at a country music festival Sunday, killing at least 59 people and injuring hundreds more in the deadliest mass shooting in modern American history.

The attack, at least initially, was as inexplicable as it was horrifying. Law enforcement officials said they could not immediately tell what drove Stephen Paddock to fire at thousands of unsuspecting concertgoers from the 32nd floor of the Mandalay Bay Resort and Casino before killing himself.

Authorities said a sweep of law enforcement databases showed Paddock had no known run-ins with police, and — despite the Islamic State’s repeated claims otherwise — investigators also could not find any connections to international terrorist groups. He was the son of a notorious bank robber and his own crime demonstrated some amount of sophisticated planning.

Police said he stayed in a large hotel suite for several days and aroused no suspicion, bringing with him an arsenal of 17 guns — their calibers ranging from .223 to .308, some with scopes — authorities said. One of the weapons he apparently used in the attack was an AK-47 type rifle, with a stand used to steady it for firing, people familiar with the case said. He fired, without warning, from an elevated position on an open-air venue, leaving his victims few options to avoid harm.

“I can’t get into the mind of a psychopath,” said Joseph Lombardo, the sheriff of the Las Vegas Metropolitan Police Department, which is leading the investigation.

© Provided by WP Company LLC d/b/a The Washington PostInvestigators on Monday searched Paddock’s home and another piece of property he owned, and they hoped to review surveillance footage and other electronic equipment to determine how and why Paddock perpetrated an unprecedented massacre.

Among the questions they have: How a former accountant with a penchant for high-stakes gambling obtained a weapon that sounded to those on the ground like it could fire as an automatic, and how he was able to bring it and many other weapons into a Vegas hotel suite undetected.

Lombardo said hotel staff had been in and out of the two-room suite, which Paddock had stayed in since Sept. 28, and spotted nothing “nefarious,” though he had more than 10 suitcases.

“It wasn’t evident that he had weapons in his room” before the shooting, Lombardo said.

Investigators believe at least one of the guns functioned as if it were fully automatic, and they are now trying to determine if he modified it or other weapons to be capable of spitting out a high volume of fire just by holding down the trigger, people familiar with the case said.

Gun purchase records indicate Paddock legally bought more than two dozen firearms across a period of years, according to a person close to the investigation. Guns & Guitars, a store in Mesquite, Nev., said in a statement that Paddock purchased some of his weapons there, but employees followed all procedures required by law, and Paddock “never gave any indication or reason to believe he was unstable or unfit at any time.” Lombardo said Paddock also seemed to have purchased guns in Arizona.

Investigators also found at least 18 additional firearms, thousands of rounds of ammunition and the chemical tannerite, an explosive, at Paddock’s home in Mesquite, Nev. They also found ammonium nitrate, a chemical that can be used in bomb-making, in Paddock’s vehicle, Lombardo said.

More than 22,000 people had been at the Route 91 Harvest festival, a three-day country music concert with grounds across the street from the Mandalay Bay resort, when the shooting began about 10 p.m. Sunday, according to police. As country star Jason Aldean played what was expected to be one of the last sets of the night, Paddock opened fire — his bullets flying from a window on the casino’s golden facade, which Paddock had smashed with some type of hammer.

Aldean fled the stage. Thousands began racing for safety under the neon glow and glitz of the Vegas Strip.

“People were getting shot at while we were running, and people were on the ground bleeding, crying and screaming. We just had to keep going,” said Dinora Merino, 28, a dealer at the Ellis Island casino who was at the concert with a friend. “There are tents out there and there’s no place to hide. It’s just an open field.” 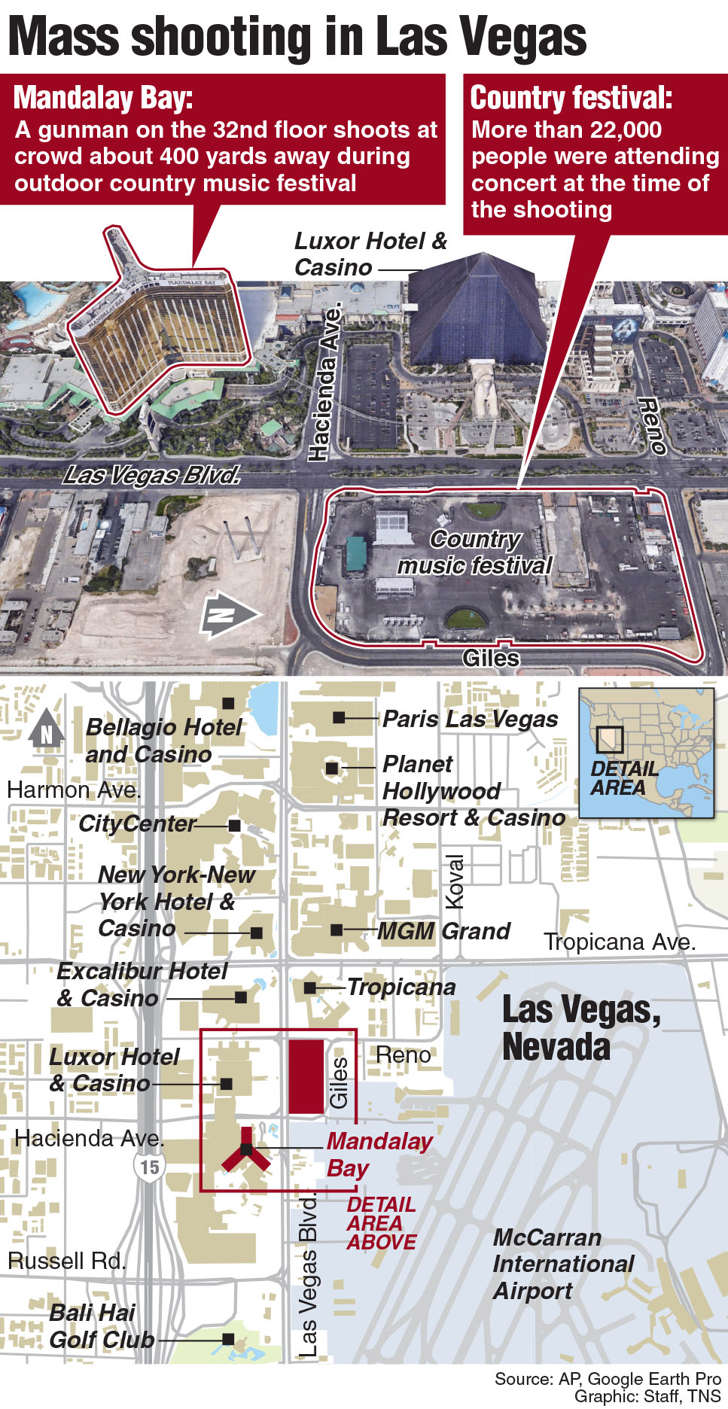 The death toll in Las Vegas was massive, surpassing the 49 people slain by a gunman in Orlando in June 2016. That shooter, who later said he was inspired by the Islamic State, opened fire inside a crowded nightclub. And Lombardo said the number of dead from Sunday’s concert shooting could rise, as an additional 527 were thought to have been injured.

The dead included a behavioral therapist who was soon to be married, a nursing assistant from Southern California, a commercial fisherman and an off-duty Las Vegas city police officer. Two other officers who were on duty were injured, police said; one was in stable condition after surgery, and the other sustained minor injuries. Another off-duty officer with the Bakersfield Police Department in Southern California also sustained non-life threatening injuries, according to a statement from the department.

Some of the wounded were injured not by gunfire, but in the ensuing chaos. One 55-year-old California woman who declined to give her last name said she was “trampled” trying to flee what she initially thought were fireworks. Clark County Fire Chief Greg Cassell said responders saw a “wide range” of injuries, including gunshot victims, those wounded by shrapnel, people who were trampled and people who were hurt jumping fences.

But those who ran said they could clearly see the gunman’s toll in the bullet wounds on those around them.

Taylor Benge, 21, said that when the lights came on he realized that “about five feet to the left of me there was a man with a bullet wound to his chin.”

Jonathan Smith — who came to Vegas to celebrate his brother’s 43rd birthday — was shot at least twice, including once in the neck.

Police and hotel security ultimately scoured several floors of the hotel looking for the shooter and came upon Paddock’s suite, Lombardo said. At some point, Paddock fired through the door and hit a security guard in the leg, he said, adding that the guard is expected to survive. SWAT officers ultimately stormed the room and some fired shots, though Paddock is believed to have killed himself, Lombardo said. He was not counted in the death toll that authorities reported.

President Trump ordered flags flown at half-staff and said he would visit Las Vegas on Wednesday. He praised the “miraculous” speed with which local law enforcement responded to the shooting — asserting that their actions saved lives — though he noted that hundreds were still mourning the loss of loved ones. Answers for them, he said, would “not come easy.”

“It was an act of pure evil,” Trump said during remarks from the White House.

Eric Paddock, Stephen Paddock’s brother, said he was stunned to learn that his brother could be responsible for such violence.

Stephen Paddock had no history of mental illness nor did he have problems with drugs or alcohol, Eric Paddock said, noting that his brother was a high-stakes gambler, sometimes wagering hundreds of dollars on a single hand of video poker.

When he spoke to the FBI, Eric Paddock said he showed agents three years of text messages from his brother, including one that mentioned winning $250,000 at a casino. A federal law enforcement official said investigators had reviewed reports suggesting Paddock engaged in high-dollar gambling, and they are trying to determine whether he faced financial strains.

Eric Paddock said his brother was “wealthy,” in part because he had no children to support. Stephen Paddock had worked in the past as an accountant, and he had real estate investments in the Orlando area, Eric Paddock said.

Eric Paddock said he knew his brother had guns — Stephen once took Eric’s children skeet shooting — though not the sort of weaponry that police discovered.

Police said they believe Paddock was a “lone wolf” attacker, though they were still interested in speaking more with a woman named Marilou Danley who lived with him in Mesquite, Nev., a little more than an hour outside of Las Vegas on the Arizona border. Police had said they were searching for Danley, Paddock’s girlfriend, in the immediate aftermath of the shooting, but they later said she was outside the country — as of Monday afternoon, in Tokyo — and not involved in the shooting.

“We still consider her a person of interest,” Lombardo said Monday. He said investigators also are exploring a report that Paddock attended a different music festival in September.

Not long after the shooting, the Islamic State claimed responsibility, though law enforcement authorities were quick to reject that assertion. “We have determined, to this point, no connection with an international terrorist group,” Aaron Rouse, the special agent in charge of the FBI in Las Vegas, said at a news briefing.

The FBI was involved in the case — and the Bureau of Alcohol, Tobacco, Firearms and Explosives was helping trace the weapons — but they said they were supporting local authorities in Las Vegas. Homeland Security officials said there were no specific, credible threats to other public venues across the country.

The FBI had a previous dealing with the Paddock family, though it did not initially seem to involve Stephen. Eric Paddock said his father was Benjamin Hoskins Paddock, a convicted bank robber and con-man described in a wanted poster as “psychopathic’’ with suicidal tendencies. But Eric Paddock said that his father, who escaped from prison in 1969 and was at one point on the FBI’s list of most-sought-after and dangerous criminals, was not around during their childhood. Benjamin Paddock was apprehended in 1978, according to news reports.

Relatives said Stephen Paddock, a licensed pilot who owned two airplanes, was a quiet man who often went to Las Vegas to gamble and view concerts. In a statement, Lockheed Martin, the defense giant, said that Paddock worked for them for three years in the 1980s.

A former neighbor of Stephen Paddock’s recalled that his home in a 55-and-over community in Florida looked more akin to a college freshman’s dorm, with nothing on the walls and only a few pieces of furniture.

“One of the first times we met him, he told me he lived there, in Vegas,” Don Judy, his next-door neighbor in the community until two years ago, recalled. “He explained that he was a gambler, and a prospector. He said he was buying this house to check it out for his mother … and that if she liked it, he planned to buy another next door with a floor plan like ours.”

Soon, Judy said, Paddock put up a for-sale sign and was gone, saying that he was moving back to Las Vegas.

Before every US presidential election, a few disgruntled Americans can be relied on to promise that they’ll move to Canada...