A new documentary about one of the world’s most savage serial killers examines the grisly murders and resurfaces surveillance footage of his jail cell confession.

Robert Pickton, a pig farmer from Canada, butchered 49 women on his property and ground their remains into mince which he then sold to customers, some of whom were local policemen, before he was arrested in February 2002.

Now 68, he remains behind bars in British Columbia.

Kam McLeod and Bryer Schmegelsky: How to survive in Canadian wilderness

‘It’s that black or white’: Wolves must die to save Canada’s caribou

A new episode of Voice of A Serial Killer which aired on British network CBS Reality in the UK on Wednesday night, examined the killings and footage of Pickton confessing to them in his jail cell.

He did not know that he was speaking to an undercover Royal Canadian Mounted Police Officer when he described his goal of wanting to murder 50 victims, and his disappointment that he had become ‘sloppy’ and missed the target by one.

Pickton was arrested in 2002 after police found items that belonged to some of the missing women on his farm. They went to the property by chance to search it for illegal weapons they thought he might have possessed.

After arresting him, they discovered DNA traces for 26 missing women, many of whom were prostitutes who he had picked up in Vancouver’s Red Light District and brought him to have sex with then kill.

His killing techniques varied. In some cases, he injected the women with antifreeze, telling them it was drugs. In other cases, he stabbed them to death.

Once in custody in 2002, he was placed in a cell with an undercover police officer who he told about the killings.

Irritated at himself, he complained: ‘I made my own grave by being sloppy. Doesn’t that just kick you in the a** now. 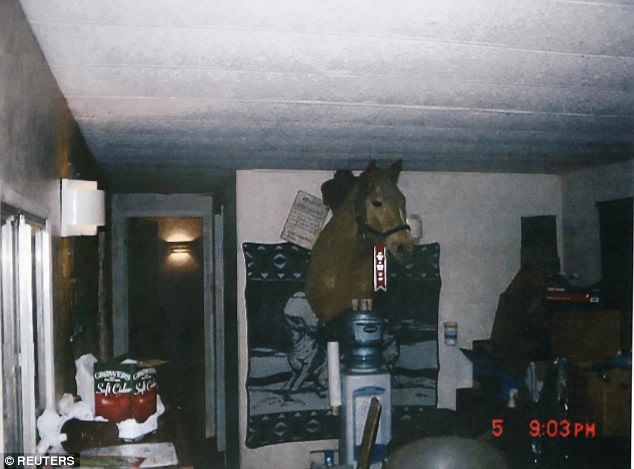 Inside the Piggy Palace: A water cooler and stuffed horse’s were among Pickton’s belongings

In the documentary, criminal experts analyse his sinister and remorseless confession.

It began with Pickton telling his cellmate, the undercover police officer: ‘They got me on this one…they’ve got DNA.’

When the undercover police officer suggested that the best way to dispose a body was in the ocean, Pickton replied: ‘I did better than that… a rendering plant.’

He continued: ‘Only I was kinda sloppy at the end, too, getting too sloppy.

‘I was gonna do one more, make it an even fifty. That’s why, that’s why I was sloppy about.

‘I wanted one more, make, make the big five O.’

In the documentary, crime author Wensley Clarkson said: ‘Robert Pickton was a serial killer who made the Texas Chainsaw Massacre look like an attraction at Disneyland. 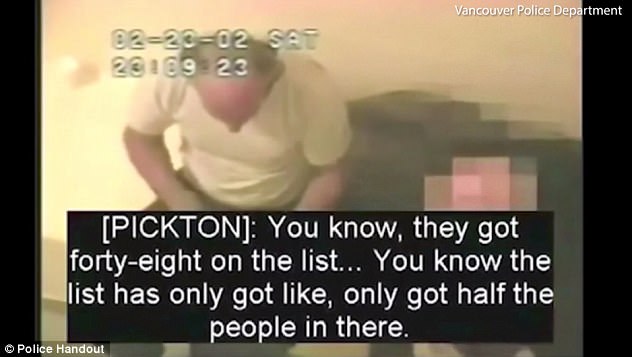 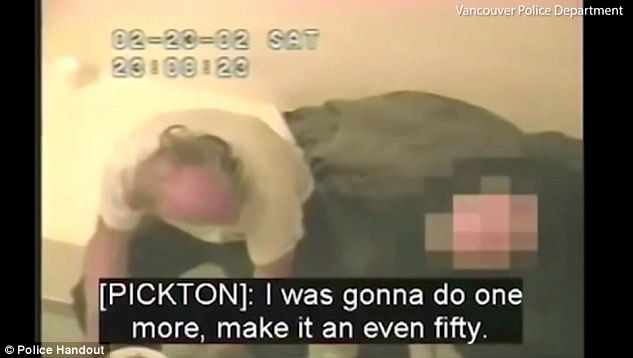 ‘There was nothing about him which made him stand out, he didn’t have great personal hygiene and he would hold barn dances with bikers and women and alcohol.

‘He was known locally for using prostitutes and had a penchant for indigenous women but when large numbers went missing no one made the connection.’

Pickton evaded police for years. Between 1991 and 2002, he is believed to have killed 49 women. That is the number he told his cellmate of.

He was only ever charged with six charges and had an additional 20 stayed.

Those accounted for the 26 women whose DNA was found on the property which Pickton and local people referred to as Piggy Palace, such was his reputation for booze and drug-fueled parties.

After he had killed the women, he took their remains to a meat rendering plant where they were ground down.

Pickton then packaged the meat and sold it to local customers of his farm.

Men who saw him at the plant later told how he was ‘dirty’ and handled the barrels of flesh with his bare hands. He fed other victims to his pigs.

Despite receiving tips about the man for years, police in Canada never had enough evidence to charge him.

In 1997, a woman who he tried to murder escaped from the farm after stabbing him in retaliation.

She went to police after fleeing the property naked and having been stabbed herself but they did not arrest him, claiming that the woman was an unreliable witness.

By the time he was finally caught, police admitted that they could have caught the man earlier.

Many of the women he killed were Native American or Indigenous  and some victims’ families feared their cases were not taken seriously because of their race.

Pickton sparked outrage from prison in 2016 after writing a book in which he claimed to have been set-up.

He said he was a scapegoat for police who were desperate to pin the women’s disappearances on someone.

The book was briefly sold on Amazon but was removed from the site following outrage from the victims’ families.

It was called Pickton: In His Own Words.

Pickton’s crimes shocked the world and were credited in part with Canada’s decision to decriminalise prostitution in 2010 to try to make the industry safer for workers by bringing it out of the shadows.

Barack Obama says he's confident that after four turbulent years, Canada-U.S. relations will be restored to a more stable...