Where Does Canada Sit 10 Years After The UN Declaration on The Rights of Indigenous Peoples?

Where Does Canada Sit 10 Years After The UN Declaration on The Rights of Indigenous Peoples?

Canada has agreed to adopt the declaration, but it’s been a slow process

The declaration was established to guarantee Indigenous Peoples individual and collective rights, the right of existence, living free of discrimination, and entitling them as peoples to self-determination under international law.

UN secretary general at the time Ban Ki-moon described it as a “historic moment when UN member states and Indigenous Peoples have reconciled with their painful histories and are resolved to move forward together on the path of human rights, justice and development for all.”

The declaration was over 25 years in the making and saw 144 states vote in its favour, with four voting against — Australia, Canada, New Zealand and the United States.

Canada cited concerns over “free, prior and informed consent” in the declaration regarding development on ancestral land or using resources within an Indigenous population’s territory, worrying it could be interpreted as granting veto powers to Indigenous groups.

In May 2016, however, Canada dropped its objector status to the declaration and formerly adopted plans to implement it in accordance to the Canadian Constitution. 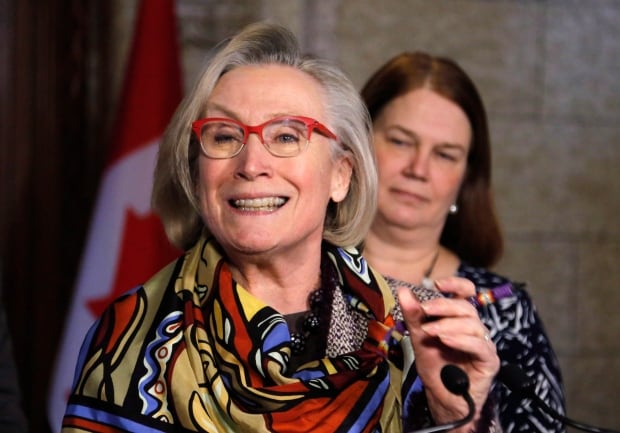 ‘We have developed new, more flexible paths to the recognition of rights and jurisdiction and self-determination as well as new fiscal relationships,’ says Minister of Crown-Indigenous Relations and Northern Affairs Carolyn Bennett (Patrick Doyle/Canadian Press)

Minister of Crown-Indigenous Relations and Northern Affairs Carolyn Bennett told the UN in April 2016 that implementing the declaration wasn’t something to be afraid of.

“We have developed new, more flexible paths to the recognition of rights and jurisdiction and self-determination as well as new fiscal relationships,” said Bennett.

“Our government affirms that meaningful engagement with Indigenous Peoples aims to secure their free, prior and informed consent when Canada proposes to take actions which impact them and their rights including their lands, territories and resources,” stated the Ministry of Crown-Indigenous Relations and Northern Affairs in an email to CBC. 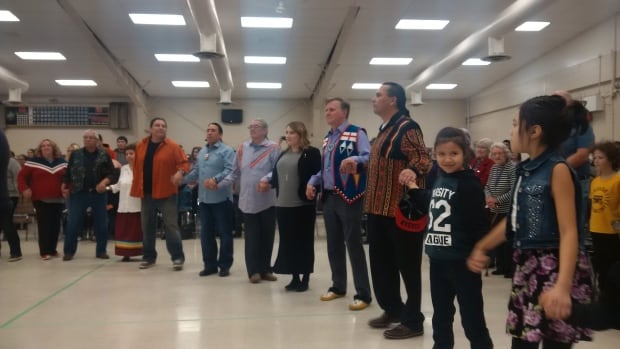 The government states that it will fulfil its commitment to implementing the declaration “through the review of laws and policies as well as other collaborative initiatives and actions.”

One of the authors of the declaration, Chief Wilton Littlechild, thinks Canada is doing a good job at implementing it.

“As I have travelled across the country to many places, I have witnessed and am very encouraged by governments at all levels, private industry, educational institutions, sports events, the medical and legal communities, faith groups and importantly Indigenous Peoples’ communities all engaged at different levels, in different ways on implementation,” he said.

“We still, of course, have a long way to go, but I think we are on a good path of reconciliation.

But Mi’kmaq lawyer, professor and activist Pam Palmater said there’s no tangible evidence that Canada is moving forward on implementing the declaration. She said the government spends more time boasting about getting the work done than actually doing anything.

“Canada is fooling people when it says it unconditionally supports UNDRIP,” said Palmater.

“All they have done is talk about it and set up processes to engage in more talk about it, but they have not started the legal process of implementation. The biggest challenge is always political will. Governments can literally talk about good ideas, plans and commitments for years and never take any real concrete action. This Liberal government has, for the most part, been more talk and less action. They are skilled in delaying action under the guise of consultation.”

Alberta was ahead of the federal government on the declaration when it announced plans to adopt and incorporate it into law and policy in July 2015. Two years in, the process is slow going, but something the province is taking careful steps to achieving, said Indigenous Relations Minister Richard Feehan.

“The intention of UNDRIP is relationship and involvement. An emphasis has been on engaging nations and communities. We’re having First Nations there speaking on the issues that are important to them at every possible opportunity.”

With the principle of free, prior and informed consent of Indigenous Peoples key to Alberta’s resource extraction industry, the province is treading lightly around the subject.

“Informed consent means that you are given the supports and resources to be fully at the table to express your point of view,” said Feehan. “It doesn’t mean that you will always get your way. What it means, though, is that you’re truly a participant.”

Ultimately, the implementation of the declaration and reconciliation go hand in hand, he said.

“Reconciliation is intimately tied with UNDRIP. We have been provided so many invitations to move on in terms of our relationship from the [Truth and Reconciliation Commission], to UNDRIP to Supreme Court decisions that are all saying it’s time we take responsibility for an ugly past, that we form relationships now and build a healthy future.”

A pillar of reconciliation

Littlechild, who was a truth and reconciliation commissioner, said that the UN declaration is a fundamental pillar to the Truth and Reconciliation Commission’s calls to action.

“Sixteen of the 94 calls to action are about the UN declaration. The major call to various sectors of Canadian society is to adopt the UN declaration as a framework for reconciliation. It is about the survival, dignity and well-being of Indigenous Peoples; so implementing the UN declaration has the possibility of healing our peoples, strengthening relationships and promoting peaceful co-existence.”

But Palmater believes reconciliation is impossible unless the federal government fully incorporates the UN declaration into law.

“There can be no reconciliation unless the core articles of UNDRIP related to Indigenous self-determination, land ownership, implementation of treaty rights, and respect for Indigenous laws, governments and jurisdictions are part of the legal foundation of what is now Canada.