Syrian Women Come to Canada to Continue Their Education

Syrian Women Come to Canada to Continue Their Education

The ongoing conflict in Syria prevented them from finishing their schooling.

Five young women who were unable to finish their education in war-torn Syria landed at Pearson International Airport Thursday to start their journey as students in Canada.

The women will be studying English at the International Language Academy of Canada (ILAC), after winning scholarships from the organization.

“These were very promising women in their own fields,” said Nelson Tome, communications manager at ILAC. “They had to stop their studies because of the conflict. We’re giving them the opportunity to continue their education.”

‘We had a lot of killing’

“My village, we had a lot of killing, destroyed homes. We lost a lot of members of our families, so we moved to Turkey,” said 19-year-old Raneem Kanann, who fled Syria two years ago. “When this opportunity came to come to Canada, I didn’t want to lose it.”

Ranging from 18 to 24, the women were chosen from hundreds of applicants by the Daughters for Life Foundation (DFL), a Canadian charity that provides education to women in the Middle East.

The foundation chose the women based on their academic history and their desire to return to Syria or other Middle Eastern countries and inspire change.

“All of the five are brilliant girls,” said Jacklin Ibrahim, communications manager for the Daughters for Life Foundation. “Some of them were studying medicine, business or dentistry. We also chose them by looking at their personality and their potential to do something for their country.”

The women, who have varying levels of fluency in English, are the first of 15 who will be arriving through the ILAC and DFL partnership.

Each has been granted a student visa and will spend the next nine months studying English at a Toronto ILAC school.

The hope is that after their Enlish-language schooling is finished, they’ll have the qualifications to be accepted into a Canadian university so that they can continue their studies. 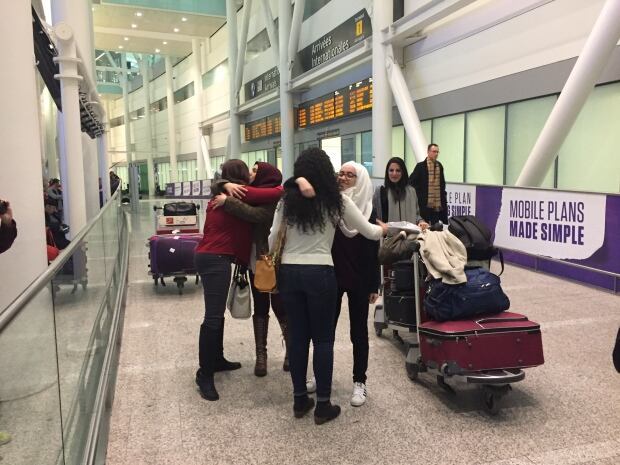 Ayaat Labbad fled Syria with her mother and sisters, leaving her father behind. She hasn’t heard from him for six years.

She spent the last little while teaching science to refugee students at the Lebanon-Syria border and says she came to Canada so that she could pursue her dream.

“I used to study dentistry in Syria,” said Labbad, 23. “I studied just three years. I have a dream to be a successful doctor.”

The women arrived from Turkey a little exhausted but excited by all the media attention.

Each woman was given a new winter coat and boots.

To help them integrate, they will be staying with Canadian families that were chosen by ILAC’s home-stay program.

“I know that Canada have many cultures,” said Labbad, adding that she’s been learning about the country since she was accepted into the program.

“Good people and kind people. All the world talk about Canada. Canada open their doors to people to study and work.”