A man near the cordoned-off area near the baggage claim for international arrivals at Dulles International Airport questioned Mirriam Seddiq as she stood with her sign offering free legal assistance.

As Seddiq later tells the story, he sneered, “Would you take these Muslims home with you?”

She looked down at herself, then back up at him before responding that she does, indeed, take a Muslim home every night: herself. Seddiq is an Afghanistan-born lawyer and one of the lead organizers of lawyers advising international passengers at the D.C.-area airport of their legal rights.

Although President Donald Trump’s travel ban is on hold following a decision by federal appeals court judges last month, the Dulles Justice Coalition is staying put with a table near Baggage Claim 13, anticipating a new, revised travel order that had been promised this week. 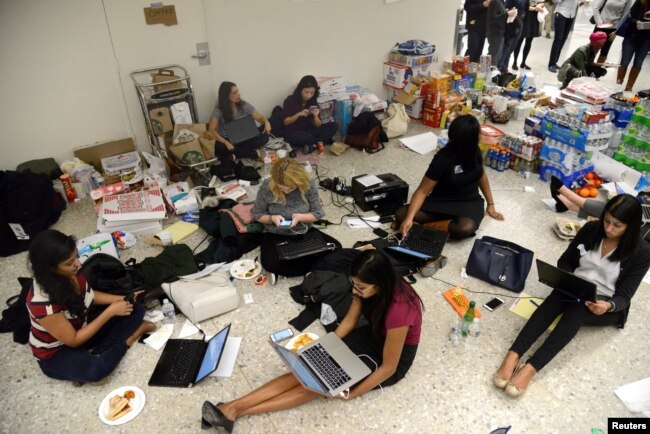 Many of the volunteers who spend 12 hours a day fielding questions at the airport are immigrants themselves.

The moment merged personal and professional issues for Shebaya, a native of Lebanon who came to the United States in 2000. She says her background as an immigrant is why she focused on domestic law, rather than international.

“That’s the reason I do civil rights,” said Shebaya, who trains volunteers at the airport and is also working on sanctuary legislation in Maryland. “It’s a way of really asserting your belonging someplace — to try to make it better.”

Alongside Seddiq and Shebaya, hundreds more attorneys, protesters and volunteers descended on Dulles, as well as other major U.S. international airports, such as New York, Los Angeles, Seattle, Chicago and more, in the days following the January 27 announcement and rollout of the travel ban.

Among Trump’s first executive orders, the travel ban virtually stopped travelers from seven majority-Muslim countries, as well as all refugees. Immigration officials at the airports scrambled to handle arriving passengers who were en route when the order came down, detaining some, turning others back.

The Trump administration leaned heavily on the premise that the travel order was for national security. Critics decried the mandate as biased against refugees and travelers from the affected countries. Omar Jadwat, senior staff attorney with the ACLU Immigrants’ Rights Project, says he has noticed in 15 years of working on immigration issues the personal connection to recent immigration is “definitely something that draws people to the field.”

“What you find so often, speaking to people, is what drew them into this area of work is a firm family understanding of immigration to their lives and to the country,” Jadwat said.

“I went to law school sort of inspired or spurred on by my and my family’s experience being here undocumented, just knowing that there were a couple of times where the system failed us,” Preciado said.

“It brings a different aspect to why I do this — perhaps additional motivation to staying in this fight and feeling like, not a different, but an added responsibility, than someone else,” she said.

“What we’re doing now feels so momentous, you sort of do feel the weight of history,” Preciado added. “It’s hard to not see this in the context of 20 years from now, to look back at the enormous sea change in the way we see immigrants in this country.”

Though the legal issues at the airport subsided after the court stay, the Dulles Justice Coalition continues training attorneys and other volunteers on how to be prepared for the next travel order, which may come next week, teaching them what questions to ask families of detained passengers and what rights different visa-holders have at the airport.

Among the lawyers who volunteered this week was Khizr Khan. An immigrant from Pakistan and the father of a slain U.S. soldier, Khan rose to national prominence last year after speaking against Trump’s anti-Muslim rhetoric at the Democratic National Convention.

“I came here to strengthen myself,” Khan said at the airport Thursday, “to know that if it got dark for me, they would be standing here for me.”

'It Must Be Horrible': Quebecers on U.S. Border Worry About Asylum Seekers Out in The Cold