A former ambassador to Canada was sworn in as Peru’s president on Friday hours after the congress voted to accept the resignation of President Pedro Pablo Kuczynski following a corruption scandal. Martin Vizcarra, who has been serving as Peru’s ambassador to Canada while also acting as the country’s vice-president, took the oath of office shortly after 1 p.m. and was given the presidential sash by congressional president Luis Galarreta.

In a 15-minute speech following the swearing in, Vizcarra said he “won’t spare any efforts in the fight against corruption.” Other than vowing to form a completely new cabinet, he gave little insight into the policies he will pursue. The leader of Peru’s largest opposition party, Keiko Fujimori, wished him success in the job minutes after he was sworn into office by the nation’s congress.

Fujimori was a bitter foe of Kuczynski, and her Popular Force party was at the forefront of impeachment procedures that forced Kuczynski to resign this week. Fujimori wrote on Twitter Friday that it’s time for Peruvians to be “united” and “optimistic,” as the nation tries to recover from the political crisis.

Earlier, congress voted 105-12 to grant Kuczynski’s request to step down after just 20 months in power, but rejected his written arguments that he was doing so as a result of his opponents’ constant plotting to undermine his rule.  Vizcarra received something of a hero’s welcome shortly after midnight Friday when he arrived in Peru from Ottawa — where he had been serving as ambassador since October 2017 — amid one of the most politically turbulent periods in Peru’s recent history.
Supporters welcomed him at the airport with a large cake in the red and white colours of Peru’s flag to celebrate his 55th birthday on Thursday. A marching band was on hand and some people carried signs reading “Peru is with Vizcarra.” 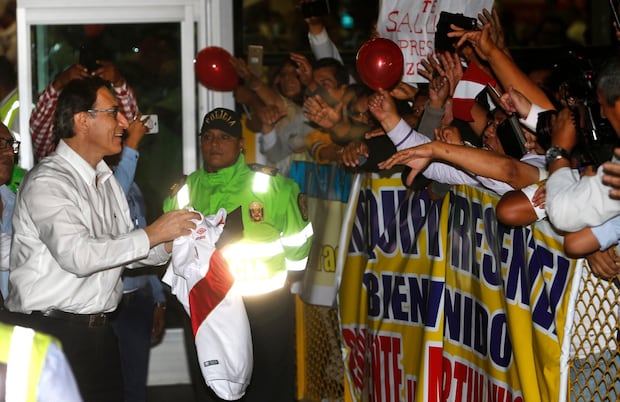 A last-minute hitch Friday had threatened to delay the transition of power. Kuczynski said in a tweet that the proposed language of a congressional resolution approving his resignation is “unacceptable,” and if lawmakers pressed forward with the wording he would reverse his decision to quit, forcing congress to go forward with plans to try and impeach him.

In the end, the language was removed. But congress nonetheless rebuked Kuczynski, 79, scolding him for a “political crisis that is the result of wrongful acts that the president himself has committed,” according to the final text of the resolution.

Efforts to oust the unpopular Kuczynski led by the daughter of former strongman Alberto Fujimori have been building for months. But the campaign went into overdrive this week after the emergence of secretly shot videos that show allies of Kuczynski, including Fujimori’s son, allegedly attempting to buy the support of an opposition lawmaker to block the president’s impeachment.

To stem off an even more disgraceful exit, Kuczynski delivered a resignation letter to congress Wednesday, blaming relentless attacks by his opponents for making it impossible to govern. Kuczynski’s downfall was his association with Odebrecht, the Brazilian construction giant that has admitted to spreading some $800 million US in bribes to officials across Latin America, including $29 million in Peru.

For months, even as three of his predecessors became ensnared in the bribery scandal, Kuczynski vehemently denied having any business or political ties to the company. But documents presented by the Popular Force party showed his consulting firm had received $782,000 in payments from Odebrecht a decade ago, some of them when he was a government minister.

The former Wall Street investor said he wasn’t then managing the day-to-day affairs of his consulting business and denied any wrongdoing.

Vizcarra not known to most Peruvians

Stepping into the void left by Kuczynski is Vizcarra, whose name wasn’t recognized by 81 per cent of Peruvians in a March poll by Ipsos. His only previous experience in public office before becoming vice-president in 2016 was as governor of Peru’s second-least populated province.

While Vizcarra is expected to continue Kuczynski’s pro-business agenda, he will face a tough challenge building consensus with a hostile congress and growing public anger at Peru’s political class. Protesters scuffled with police Thursday night while calling for new elections for both president and congress.

The new president’s first test on the international stage will come in three weeks when he is expected to host U.S. President Donald Trump and other leaders at the Summit of the Americas in Lima.