In a matter of days, Canada’s boldest experiment in democratic reform will produce its first set of results.

Those who advocated for the historic move away from first-past-the-post voting hope it won’t also be its last.

On Monday, London, Ont., will be the first Canadian city in recent history to elect representatives using ranked ballots, in which voters mark their top three choices rather than just one, allowing an instant runoff in which losing candidates are eliminated and votes redistributed until someone has a majority. And once it’s over, the spin battle will begin – about whether that system deserves to be adopted elsewhere, or whether it’s enough of a bust that it shouldn’t even be used again here.

There have already been enough warning signs leading up to election day, particularly around voter confusion and apathy, for those who opposed the change to begin warming up their told-you-sos.

Supporters argue that it was always going to take a while for politicians and voters alike to get the hang of the new system – and that if you look closely, there are enough positive signs in this campaign to point to its potential to make politics more engaging, collaborative and civil.

In retrospect, the enthusiastic manner in which London moved to adopt ranked ballots in time for this year’s election left little leeway to manage expectations.

“I never in a million years thought we would get as far as we got,” says Josh Morgan, a first-term city councillor who promised while campaigning for his seat in 2014 that he would push for the adoption of ranked ballots. Back then, municipalities still didn’t have the authority to make such a change, under provincial law.

Then Kathleen Wynne’s Liberal government made good on its promise to open the door, at a moment when London was uniquely inclined to leap through it. Following years of scandal that saw former mayor Joe Fontana convicted on criminal charges, a wave of change in 2014 meant 11 of 14 city councillors were rookies, and observers say they were looking for opportunities to show they were cutting-edge. So while two other Ontario cities (Kingston and Cambridge) opted for referendums on whether to adopt ranked ballots, to be held during Monday’s provincewide municipal elections, London skipped that step.

Hopes for what the system would achieve varied. Mr. Morgan says his primary incentive was that “more information from voters can only be a good thing.” For one of his colleagues, Tanya Park – now running for mayor – it was about requiring candidates to seek majority support, which might improve civility. For another, Jesse Helmer, it was reducing advantages of incumbency and encouraging more people to run, including women and people of colour, which also drove some civic activists to push for it.

In May of 2017 ranked ballots were approved by a 10-4 vote. But the change appeared to go unnoticed by many Londoners, and there were warnings from bureaucrats about the practicality of rapid implementation.

London city clerk Cathy Saunders now says logistical worries, mostly around vote-counting, have been resolved. But she is less confident about voter education, even after many public demonstrations about how ranked ballots work.

“I have no concerns with the count,” Ms. Saunders says. “I have concerns with members of the public being confused about how to mark their ballot.”

Accounts from candidates and campaign workers speaking with Londoners this fall suggest such uncertainty abounds, especially among older voters. One common misconception is that if they mark only one candidate their ballot will be spoiled. Another is that ranked choices will be tallied in a points system, which leaves some voters incorrectly thinking that by marking the same person three times they will give that candidate additional support. Adding to the confusion is that while ranked ballots are being used for mayoral and council elections, it’s still first-past-the-post for school trustees.

Ms. Saunders says there will be extra staff at the polls to offer explanations, but that may not be easing anxiety that could prompt some voters to stay home.

“People do not want to feel stupid when they go to a voting station,” says Paul Paolatto, a right-leaning entrepreneur and civic leader campaigning for the mayoralty. “And my concern right now is this program makes people feel stupid.”

An additional source of irritation could come after voting ends. Although tabulated all at once electronically, results will be released in rounds, to make transparent how races play out as each losing candidate is eliminated. But only the first-round results will be released Monday evening (a decision Ms. Saunders attributes to not wanting to force staff to work all night), meaning that if no candidate gets more than 50 per cent of first-choice votes, Londoners will have to wait until Tuesday.

In the more crowded contests – including a 14-candidate mayoral election considered to have four leading contenders, with Ms. Park on the left and Mr. Paolatto, former Conservative MP Ed Holder and populist businessman Paul Cheng to her right – that could make for a very drawn-out process for voters accustomed to quickly knowing who won.

For proponents, the challenge is to point to less visceral signs of progress.

The most visible of those are in how candidates interact with each other, in the form of launching fewer attacks against opponents from whose supporters they might draw second-choice votes, and actively trying to find common ground.

The mayoral race offers evidence of both – notably in the treatment of Ms. Park. While Mr. Cheng has shown little inclination to build bridges, the other two right-of-centre candidates seem to be going out of their way to say nice things about her. And Mr. Holder and Mr. Paolatto have been highlighting socially liberal or moderate positions – including Mr. Holder supporting supervised injection sites for drug users – that could endear them to Ms. Park’s downtown support base.

“I do believe that people have to find some issues where there’s crossover or broader appeal,” concedes Mr. Paolatto, generally not a ranked-ballot fan, “and that’s been helpful.”

Another encouraging change in behaviour is happening more at the ground level.

Like most canvassing politicians, businessman John Fyfe-Millar didn’t waste his time approaching houses with rivals’ signs on the lawn when he campaigned for a downtown council seat in 2014. But this time, he says, he’s knocking on every door. Unprompted, several other 2018 candidates mentioned the same thing – the point being that there might be second- or third-choice votes to be had.

“You get to interact with every voter,” says Arielle Kayabaga, a first-time candidate competing against Mr. Fyfe-Millar, “and you don’t feel the intimidation of them having already made their decision.”

Ms. Kayabaga, who appears to be alongside Mr. Fyfe-Millar at the front of her ward’s seven-candidate field, embodies the sort of candidate ranked-ballot advocates were hoping it would help attract. 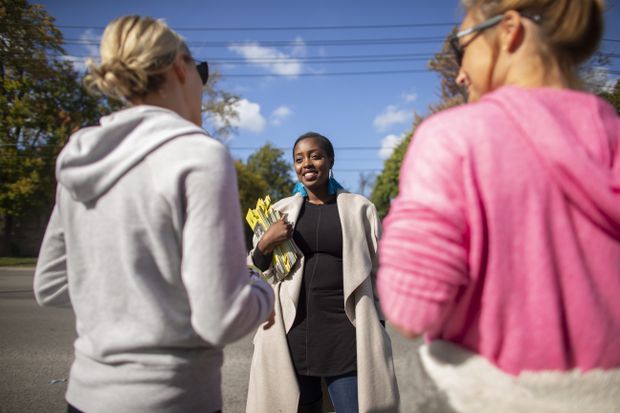 Long active civically but not widely known before entering the race, the 27-year-old could become the first black woman elected to London’s council. The new system helped persuade her to run, she says, because it would give her a fairer shot.

Ms. Kayabaga is a bit of an outlier in this election, which didn’t draw a great influx of candidates from outside the political establishment. But the idea is that similar considerations will make candidate fields in future elections more gender-balanced and diverse. And that fits into the pro-reform side’s favourite message at the moment: Be patient.

The advice they say they’ve received from cities elsewhere that have implemented ranked ballots – such as Minneapolis, Minn. – is that it will take at least a couple of cycles to get their measure.

By next time, maybe candidates will have learned from the 2018 results, and adjusted strategies in ways that produce the sought-after civility and consensus-building. And voters will know better what to expect.

Besides, they point out, there are many variables in any campaign. In this one, voters might have been grumpy regardless, after excitement over the mayor they elected in 2014 on a modernization agenda turned into disappointment when he wound up in a sex scandal and then decided not to seek a second term. So if turnout is low, it will be hard to tell how much that reflects on ranked ballots.

But those excited just 17 months ago about London leading the way know the potential consequence, if there’s the appearance of a setback for democratic participation.

If not a return to first-past-the-post, it could at least add up to fresh ammunition for skeptics who argue that despite electoral reform’s appeal to political wonks, most voters lack much appetite for shifting from first-past-the-post.

Anne-Marie Sanchez, who heads the local group Women & Politics, says readying “countermessages” to complaints in the election’s immediate aftermath is something her civic-activist community has lately been strategizing about.

“This can’t just be an experiment for one election only,” Ms. Sanchez argues. Jumping to conclusions too quickly, she says, “would be a waste of everything” – all the resources and good faith expended so far, and all the opportunity to see if London can point all of Canada toward better politics.