More than 5,700 asylum seekers crossed illegally from the US into Canada last month, a rise of almost 80% on July, government figures show.

Canada has seen a surge of refugee claimants in recent months, especially into the province of Quebec.

There were 5,712 people intercepted by the Mounties last month at the Canada-US border, bringing this year’s total to 13,211.

In Manitoba, 80 people were intercepted after crossing the border. In British Columbia, 102 people were stopped.

But the vast majority – 5,530 – crossed into Quebec in the first part of the month, where people can easily cross a ditch at the end of a rural New York state road into Canada. 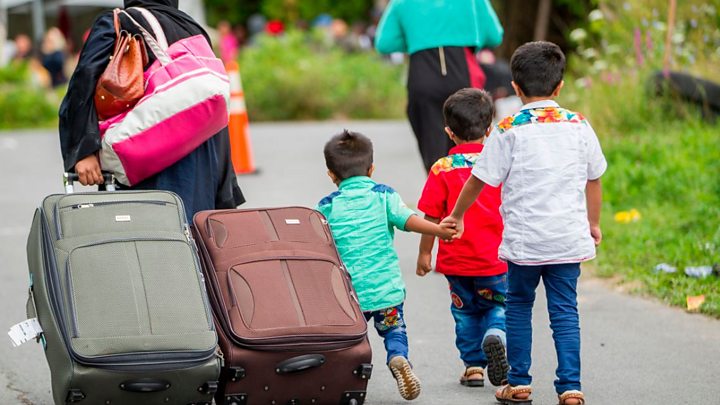 The influx into the predominantly French-speaking province was led by Haitians who had been living legally in the US, protected by a programme that extended temporary protection from deportation to Haitian citizens after the devastating 2010 earthquake.

The Trump administration has hinted it will not extend that protection when it expires in January 2018.

Canada completely lifted its own protected status for Haitians a year ago. In 2016, about 50% of all asylum claims by Haitians were rejected.

In January, 315 people were intercepted in Canada after crossing the border, increasing to 887 in March and 3,134 in July.

Prime Minister Justin Trudeau has tempered his language on refugees and immigration in recent weeks.

He has noted that while Canada remains an “opening and welcoming society”, it is still a country of laws with rigorous immigration and customs rules.

In August, federal Liberal MP Emmanuel Dubourg, who is of Haitian origin and speaks Creole, was tasked with engaging extensively with Haitian media in American cities like Miami and New York.

And earlier this month, MP Pablo Rodriguez was sent to Los Angeles to meet with the Hispanic community there.

Thousands of immigrants in the US from Honduras, Nicaragua and El Salvador also face losing their temporary protected status.

The Canadian government is concerned they will also seek a second shot at asylum in the north.

Asylum seekers are usually stopped immediately by the Mounties after crossing the border.

Once apprehended, they are identified, searched and screened. If they are eligible to make an asylum claim, they are allowed entry and referred to the Immigration and Refugee Board of Canada.