The 33-year-old from Toronto was the National League’s most valuable player in 2010 and is a four-time all-star. He was expected to anchor Canada’s batting lineup.

“I have decided to decline this year’s WBC event,” Votto said in a statement posted to the Reds Twitter account on Wednesday. 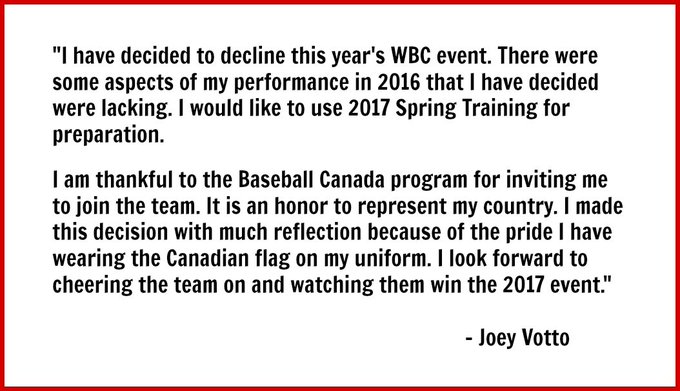 “There were some aspects of my performance in 2016 that I have decided were lacking. I would like to use 2017 spring training for preparation.”

“I am thankful to the Baseball Canada program for inviting me to join the team,” said Votto. “It is an honour to represent my country. I made this decision with much reflection because of the pride I have wearing the Canadian flag on my uniform. I look forward to cheering the team on and watching them win the 2017 event.”

The 2017 edition of the international tournament will be held March 9-22 in South Korea, Mexico, Japan and the United States.

Canada is scheduled to open its tournament in Miami against the Dominican Republic on March 9.