Intellectual Property Could Be Key As Canada and U.S. Compete for Frigate-Building Bids

Intellectual Property Could Be Key As Canada and U.S. Compete for Frigate-Building Bids

Bidders might choose to participate in ‘one, but not both’ shipbuilding projects, analyst says

The U.S. navy is in the market for up to 20 patrol frigates in a multibillion-dollar program that one defence expert says could cut into Canada’s plans for its own, more modest project.

Not only is the American program more lucrative, but Canada’s intellectual property demands could put it at a further disadvantage in the fight for international bidders, says defence analyst Danny Lam.

The Pentagon issued a request for information to the defence industry on July 10 for its new warship program. It proposes to open up competition to foreign designs in a manner similar to the Liberal government.

Lam says both programs have very similar requirements, but the Americans are moving more aggressively and want to begin construction on the first frigate in 2020.

The Canadian program, on the other hand, remains on schedule for the “early 2020s,” according to Public Works and Procurement Services Canada.

Perhaps more importantly, Lam said, is the backroom dispute over intellectual property rights that’s been raging for over a year between ship designers and the Liberal government.

Ship designers from France, Britain, Italy and the U.S., among others, are part of the Canadian competition.

Some of the 12 bidders, particularly those with designs dependant on electronics developed in conjunction with their home governments, have balked at the amount of technical data being requested by the Canadian government. 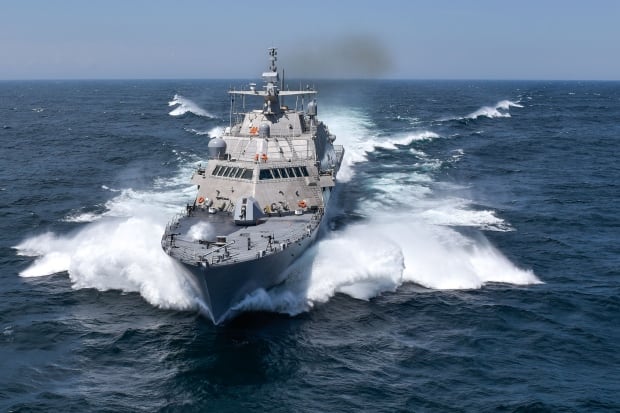 The USS Detroit, one of the U.S. navy’s Freedom-class littoral combat ships. On July 10, the navy issued a request for information for a new frigate-building program. (U.S. Navy/Lockheed Martin/Provided

Defence and procurement officials have insisted the information is necessary to maintain the new fleet in the decades to come.

Part of the issue, Lam said, is the fact the nearly $60-billion Canadian program is being managed by an outside company, Halifax-based Irving Shipbuilding.

He said companies are concerned their data could be appropriated and used by Irving, or others in the industry, to come up with an entirely new warship design.

Irving officials, speaking on background in the past, have dismissed that concern.

Lam also predicted that once the project’s database is established, the Canadian program will become a top target for Chinese, Russian and North Korean hackers, who would try to steal the information.

As such, the U.S. government would likely have significant security concerns about those companies participating in the Canadian program, Lam said.

“They can participate in one or the other, but not both programs.”

Warship design proposals were supposed to have been submitted to Irving and the Canadian government last spring, but the deadline was pushed off until late summer.

Officials at Irving would not comment on the project.

A Public Works spokesperson dismissed Lam’s arguments, noting there are already roughly 100 ships being built in the U.S.

“The issue of intellectual property has been the focus of considerable engagement with the 12 pre-qualified bidders” throughout the process, he said.

The companies bidding to supply the design and help with the construction of the Canadian warships have already spent millions of dollars to prepare for the competition and that could be incentive enough to stay in it.

News organizations have been losing ad revenue to online companies such as Facebook and Google for years. Over that...