A Ghanaian asylum seeker who lost his fingers to frostbite while crossing into Manitoba from the U.S. on Christmas Eve has won his case to stay.

Seidu Mohammed, 24, told CBC News he was thrilled when he learned Wednesday night that the Immigration and Refugee Board accepted his claim.

“Good news, I won my case, and I have been accepted to stay in Canada — am so excited,” he wrote in a message.

His immigration lawyer, Bashir Khan, said Mohammed cried with joy at the news.

Mohammed still has an uphill battle, recovering from losing all his fingers, but he is determined to make a life in Winnipeg, Khan said.

“He’s a real Canadian at heart. He is inspired by and attracted by Canadian values, that everyone has a contribution to make in society.

“I expect good things from him.” Mohammed fled Ghana for the United States in 2015 fearing that his sexual orientation would put his life in danger in the country, where gay sex is illegal. (CBC)

Mohammed fled Ghana for the United States in 2015 fearing for that his sexual orientation would put his life in danger.

He says he was outed as a bisexual man during soccer training camp in Brazil in 2014 after the team manager found him with a same-sex partner.

“It’s illegal to be gay in Ghana. It’s a crime,” said Khan, noting the refugee board “acknowledged him as a person in need of protection.”

Shortly after he arrived in Manitoba, Mohammed told CBC that his father, a strict Muslim, disowned him. Mohammed worried he would be persecuted — or worse — if he was forced to return to Ghana, and he didn’t believe the government or police would protect him.

Fearing U.S. President Donald Trump’s immigration crackdown after his visa ran out, Mohammed made the decision — like hundreds of others in the past year — to sneak into Canada and apply for refugee status.

Since January, 2,000 people have made that same journey, with the majority crossing the border in Manitoba or Quebec.

While planning his crossing, Mohammed met another man, Razak Iyal, 35, who had the same idea. 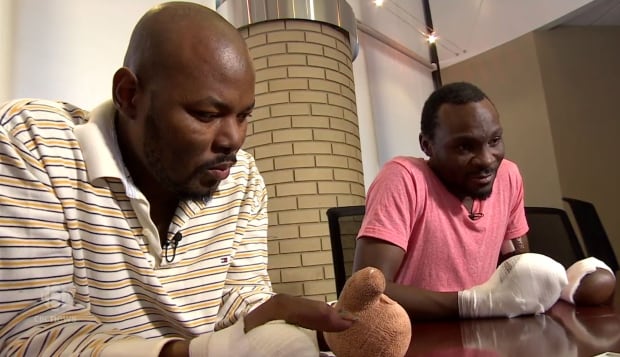 Razak Iyal, 35, and Mohammed crossed into Manitoba on a bitterly cold Christmas Eve in 2016. They were found by a truck driver who called for medical help. (CBC)

The two of them took a bus to Grand Forks, N.D., then flagged a cab and spent $400 for a ride to a spot near the U.S.-Canada border on Dec. 24. From there, they made the long walk into Emerson, Man.

It was Christmas Eve, and the underdressed men shambled through frozen fields in a temperature that hovered around the –18 C mark, but with a wind chill that made it feel more like –30.

They were disoriented and wondering where the border immigration point was when a truck driver noticed them, stopped and called 911 to get them medical help.

The local Ghanaian community in Manitoba, as well as resettlement agencies, rallied around the men and raised funds on their behalf.

Mohammed said doctors could have used some of his toes to replace them, but he declined because he wanted to still be able to play soccer.

Iyal, whose refugee hearing is next month, was also badly frostbitten. All his fingers were amputated except for his thumbs.

Canada Won’t Allow a Man to Get a Vanity Plate with His Own Last Name, Allegedly Because of Trump