Fragility in Europe is on the Rise, and We’re not doing Enough to Respond

Fragility in Europe is on the Rise, and We’re not doing Enough to Respond

Two of the world’s biggest economies at risk of recession

Europeans have a ‘right to be forgotten’ online. Should Canadians?

European security has entered a period of intense fragility. Three broad factors are now at play. Taken together, they make it all the more difficult to implement coherent responses.

A Russian rejection of the West

First, the Russian government has become bolder in its rejection of the West. It has declared war on the eastward spread of norms and structures of the Western liberal order, represented by the European Union and NATO.

It has threatened to cut gas flows and has used military force to stymie Ukraine’s efforts to link up institutionally with the EU – its annexation of Crimea and military intervention in the Donbass in 2014, and continued support for separatist groups there, keeps the government in Kyev on the back foot. At the same time, the fruitless attempts to implement the 2015 Minsk II Agreement risk delaying much-needed EU-supported economic and institutional reforms in the country. 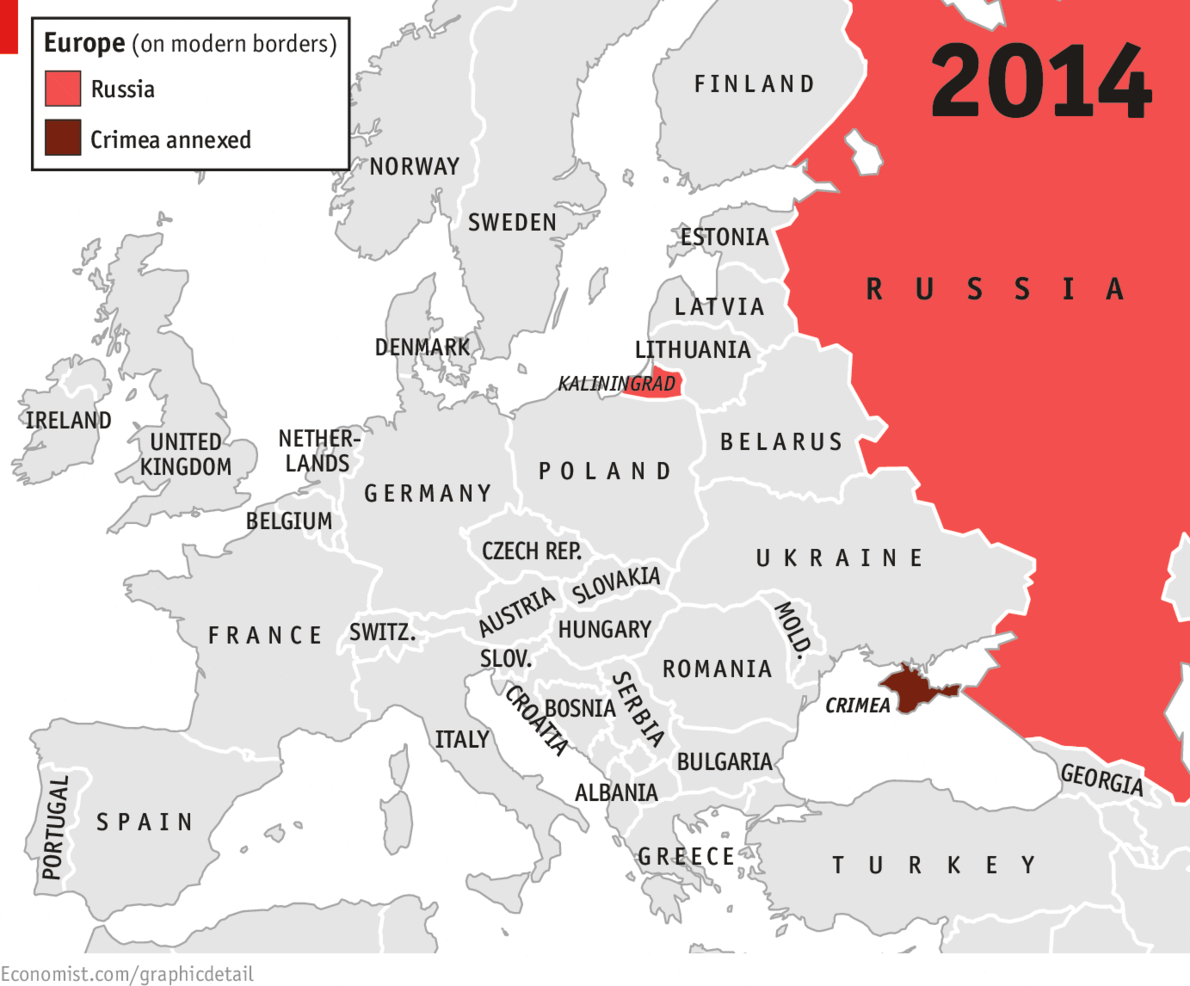 Not content with proactively defending its perimeter, Russia is also pushing back against EU and NATO members by undermining their cohesion and raising their sense of insecurity.

In the past two years, Russia has increased the number and size of its military exercises around the small and vulnerable Baltic States. It has deployed advanced weaponry, including nuclear capable cruise missiles, into the Kaliningrad enclave between Lithuania and Poland. Recalling the practices of the Cold War, it has been fomenting and financing pro-Russia and anti-EU political parties and groups across Europe and raising the tempo of its propaganda and misinformation campaigns. At the same time, it is undertaking concerted cyberattacks on established political parties and leaders.

Second, the election of Donald Trump to the White House has increased fears that the US will weaken its commitment to the physical defence of Europe and the transatlantic alliance.

His intention to re-set US relations with Russia raises questions about America’s willingness to confront Russian efforts to erode European security by means short of outright conflict, including hybrid warfare. And while his priorities in office are yet to be revealed, Trump’s campaign rhetoric suggests that continued US support for NATO allies will be contingent on them increasing their defence spending.

The close connections between some of Trump’s key political advisers, including Stephen Bannon and other proponents of “alt-right” post-truth politics, and far-right European political parties such as the Front National in France, the Party of Freedom in the Netherlands and the Freedom Party in Austria, also risk weakening support for those European political parties that are committed to a strong transatlantic partnership and to protecting Europe from Russian political interference.

Instability in the Middle East, inertia in Europe

Third, European governments have been unable to agree on how to best intervene to improve the security situation in the surrounding MENA region.

While Europe continues to provide aid and emergency relief to Syria’s neighbouring countries, it has been largely absent from efforts to end the brutal civil and proxy war in Syria, with talks for a ceasefire in Aleppo brokered by Russia and Turkey. The Israeli-Palestinian conflict remains as far from resolution as ever. War continues to rage in Iraq and Afghanistan. Libya has fragmented into war-lordism, and the future for Algeria is uncertain.

While Morocco appears to be stable, Tunisia’s democratic government is vulnerable to terrorist activity. The Egyptian military-led government is struggling to deal with a growing terrorist threat. And the arrival of the Trump administration could strain the nuclear deal with Iran, increasing the incentives for the Iranian Revolutionary Guard to meddle even more actively in the Eastern Mediterranean region.

The violence and instability that has spread across North Africa and the Middle East since 2011 has created a political vacuum, giving space for international terrorist groups to build bases from which to attack European societies. Major terrorist attacks in Paris, Brussels and Berlin in 2016 have also exposed the weak and fragmented nature of many European law enforcement and intelligence agencies.

This violence is not just a security concern, however – it has led to an unprecedented flow of refugees and economic migrants into Europe. The EU’s response has been piecemeal, characterized by stark divisions and hostilities between member states, and temporary and emergency-driven relocation mechanism within the EU, which has in turn damaged the political credibility of standing institutions. In the face of this growing instability, Europeans are questioning the EU and NATO’s ability to respond to these threats.

Burying our heads in the sand

The temptation for European citizens is to bury their heads in the sand and hope that this rising tide of insecurity recedes of its own accord. This would be wishful thinking. After an extended period of ahistorical peace in Europe, the worsening security situation in and around Europe means that citizens and governments will once again have to invest in protecting their freedom and way of life.

Is Europe ready to step up to this more challenging security environment? European countries are still in the early phase of economic recovery from the Eurozone and 2008 financial crisis. Debt levels are high, even among the most successful economies like Germany. In 2015, the average government gross debt for the EU28 was around 85%.

The idea of spending more on defence and other security capabilities is politically unappealing at a time when social welfare spending is under pressure from budget cuts and widespread demographic ageing. On top of this, the Brexit process risks distracting and dividing EU member states, while further weakening the EU through the loss of one of two of its most powerful military members.

A new era of European security

Slowly, perhaps belatedly, however, Europeans are responding. In terms of hard security, defence spending is on the rise in a number of European countries. Poland and Estonia have now joined the US, UK and Greece in meeting NATO target spending of 2% or more of their GDP on defence, while nine European NATO members now spend 20% or more of their defence budgets on equipment.

Following the NATO summits in Wales and Warsaw in 2014 and 2016 respectively, NATO allies are implementing a Readiness Action Plan and committing forces to a new Rapid Reaction Force. Britain, France and the United States have deployed fighter aircraft and troops on a persistent rotation to bolster the Baltic states, while NATO is positioning equipment on the territory of its central and eastern members. In November 2016, the European Union announced plans for a European Defence Action Plan which would make €5.5 billion available yearly for developing joint defence capabilities, including drones and military technology, and fostering a competitive and innovative industrial base.

Prospects for NATO-EU cooperation are also looking up, after two decades when an artificial divide prevented European governments from using the two institutions to develop a full spectrum set of responses to the diverse security threats they now face. Britain’s planned departure from the EU could remove an obstacle to the strengthening of security cooperation within the EU and may make it easier for the UK, and other third countries, to contribute to EU security missions.

In terms of the new security threats, the failures of European intelligence and domestic security agencies to track and prevent recent terrorist attacks are forcing them to modernise their procedures and consolidate their often byzantine structures and lines of command. Information sharing between member states, while still imperfect, is improving. On the cyber security front, major European countries like the UK, France and German are investing heavily in their cyber defences, while the German government may be among the first to take legal measures to tackle the spread of false information on the internet.

In terms of border control, naval operations in the Mediterranean are continuing. Last year, EU governments created a 1,500 person new border guard agency, whose members can be deployed to manage crises at its borders. Germany, France and Britain are grappling with insecurity in sub-Saharan Africa at source, with a mix of military stabilization units, training missions and traditional development and technical assistance.

Europe still has a long way to go in managing the increasingly diverse and ubiquitous threats to its security. Unless or until they face an overwhelming or persistently violent threat, European governments and societies are unlikely to elevate their defences to levels equivalent to those who are determined to treat Europe as a target.

But the sudden intensification and diversification of the security threats it confronts offer Europe an opportunity to rethink its approaches. Building a secure Europe will require meaningful, long-term investments and far closer cooperation between European states, as well as within and between the EU and NATO. It will also require re-discovering the sense of European and transatlantic solidarity that helped confront the dangers of the Cold War era.