Fleeing U.S. for Asylum, and Handcuffed in Canada

Fleeing U.S. for Asylum, and Handcuffed in Canada

They drag their luggage, carry their young children in their arms and join hands to help one another over rough terrain and along snowy roads. They are immigrants, refugees and asylum seekers who are streaming across the border from the United States into Canada in higher numbers.

For those who cross illegally, handcuffs await. They are detained, interviewed by the Royal Canadian Mounted Police and turned over to the Canadian border agency. 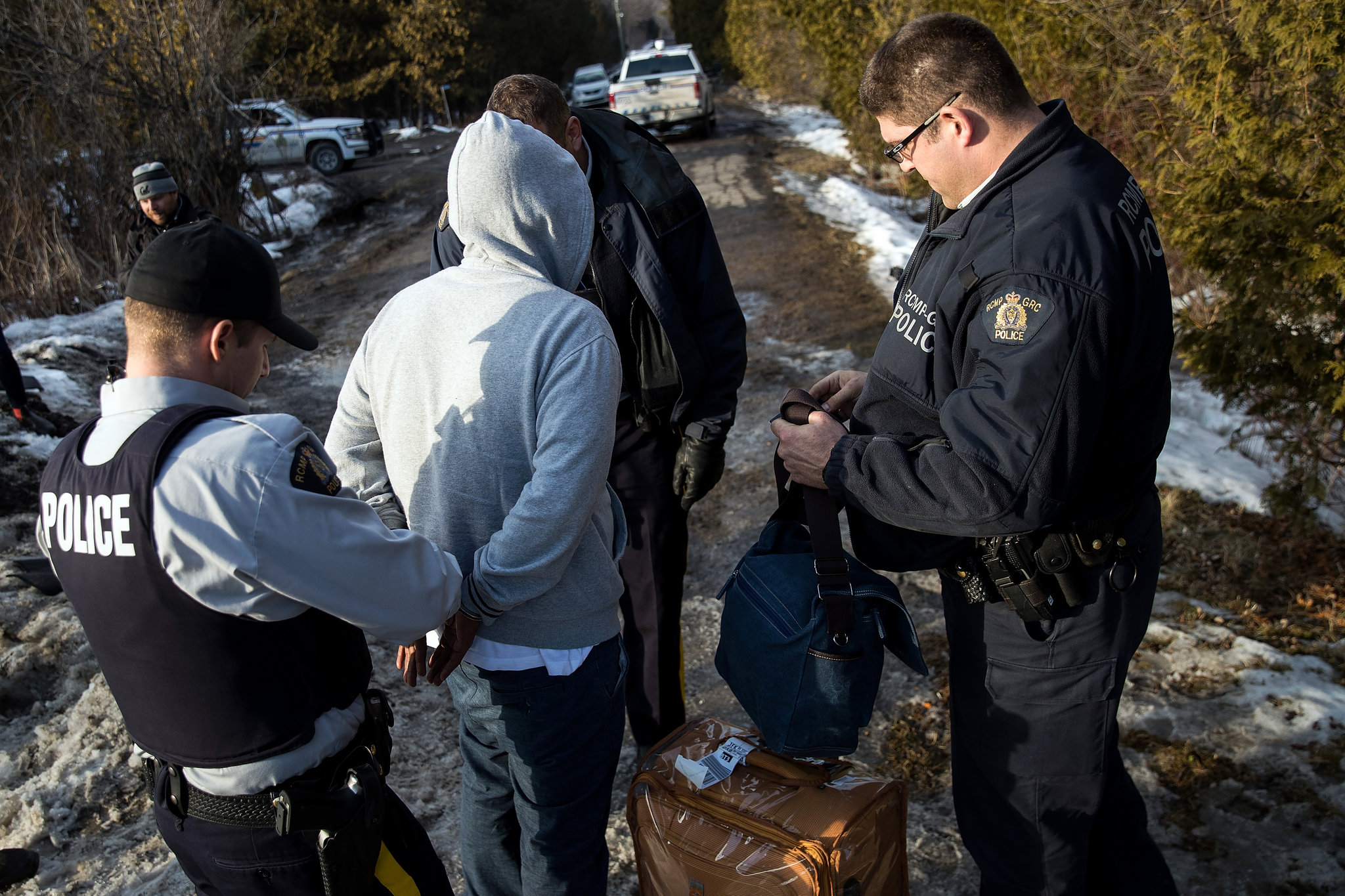 The Royal Canadian Mounted Police said last week that there had been a significant increase over the past few months in the number of people illegally crossing the border, mostly in Quebec, Manitoba and British Columbia.

The police did not provide figures, but they said the largest uptick was recorded in Quebec. In the last week alone, images of families and solo travelers from countries like Sudan and Turkey have emerged as they encounter police officers, politely waiting, at a crossing in Hemmingford, Quebec. 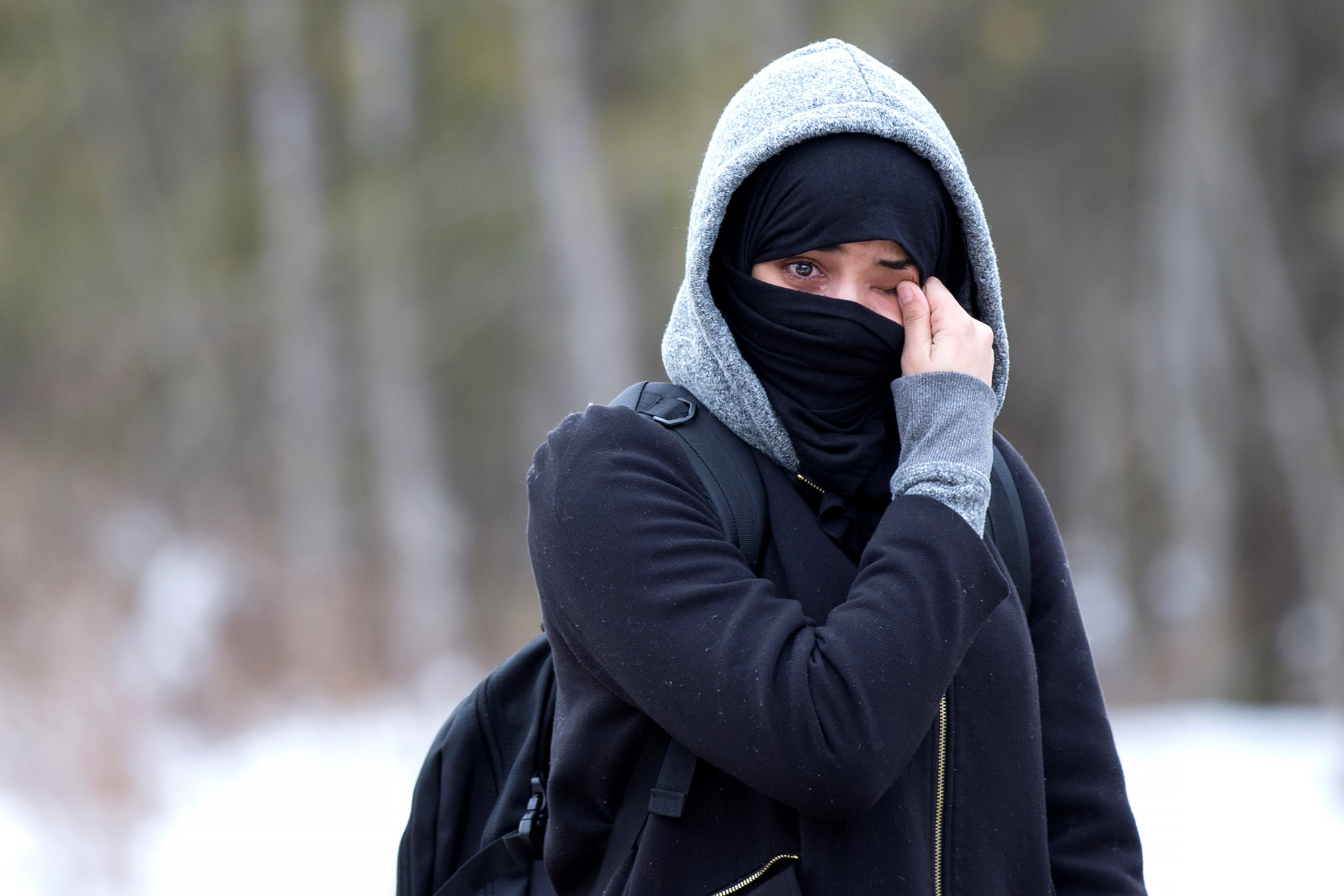 Cpl. François Gagnon, a spokesman for the Mounted Police, said that the authorities started noticing an increase in the last few months of 2016 for reasons that were “not clear cut” but that might be related to the election of Donald J. Trump and his executive order on immigration in January.

“It might be one of the reasons,” he said.

The order, targeting immigrants from seven majority-Muslim countries and indefinitely suspending refugees from Syria, was blocked by various courts. On Friday, President Trump said a new executive action would be issued soon.

‘It is a criminal activity’

Corporal Gagnon said that as soon as the would-be asylum seekers cross the border, they are advised that they would be arrested. “It is a criminal activity to cross the border illegally,” he said.

“It is the same as when I arrest a drunk driver on the road. We are going to do it for security purposes.”

He added: “The basic process for the R.C.M.P. is to handcuff everybody, based on the fact that it is criminal. Based on risk assessment, we are not going to handcuff women and children. This is a new humanitarian thing for us, as well. Those people have been through a lot and we don’t want to put more pressure on them.” 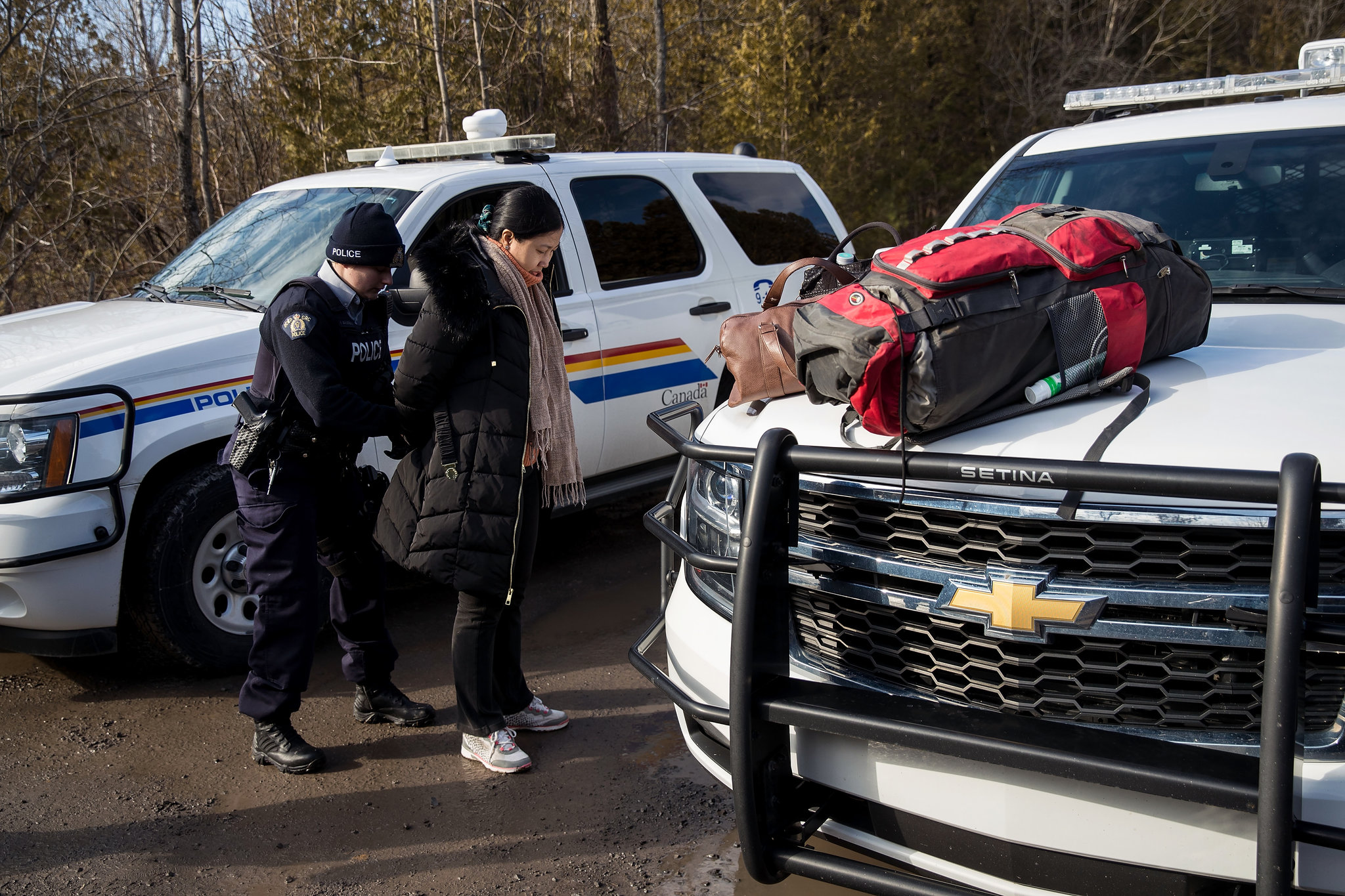 There could be fines

Once they are in custody, the migrants and asylum seekers are taken to police stations, where the handcuffs are usually removed and they are asked about their identification and country of origin.

An investigation is conducted into whether they are in a Canadian intelligence database or wanted for a crime, Corporal Gagnon said. 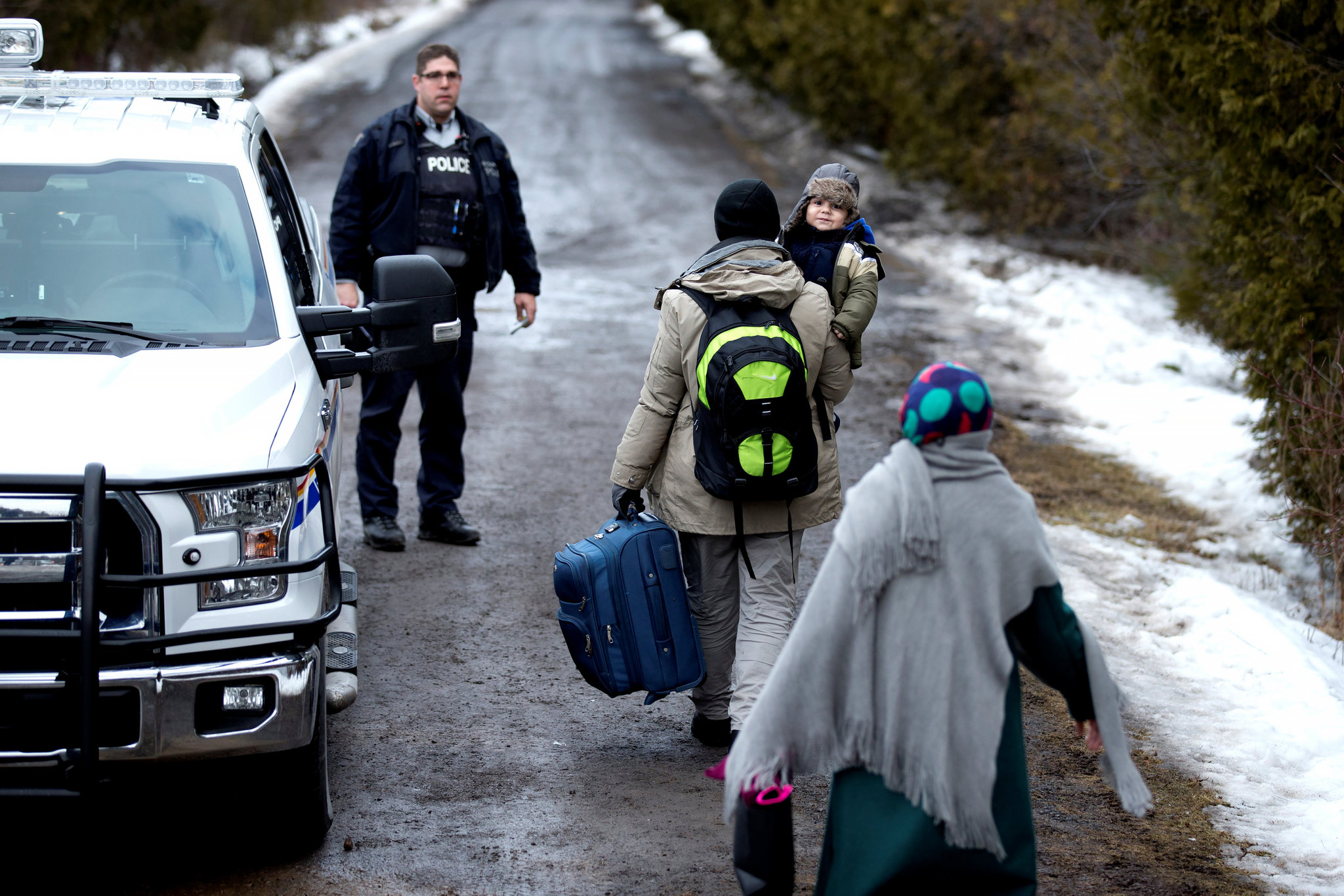 “If nothing pops up, they are going to be turned over to the Canadian Border Services Agency and then they apply for asylum,” he said.

There are no criminal charges once they establish a demand for asylum, but they could be fined, he added.

‘Canadians will welcome you’ 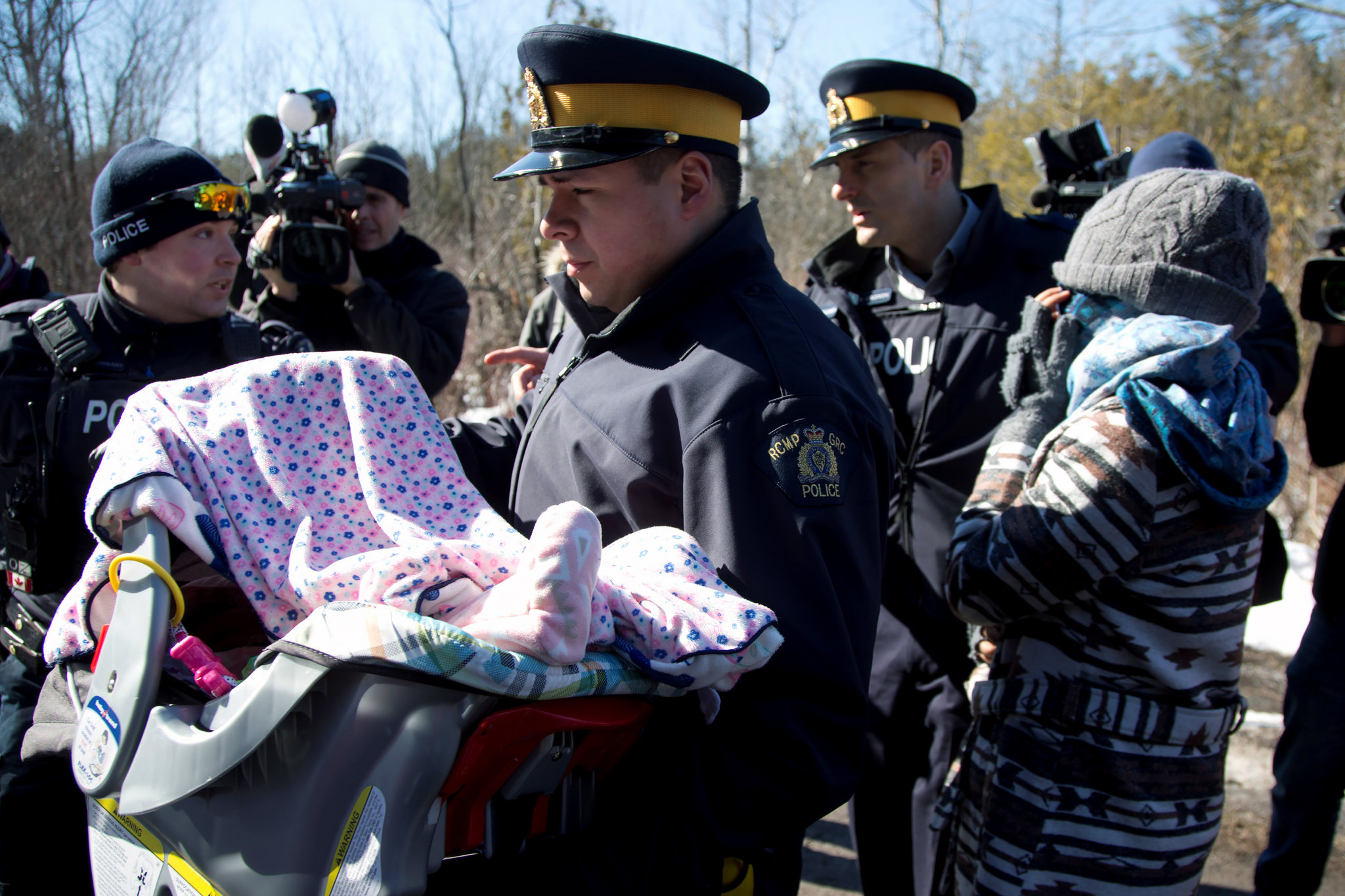 The New York Times has been tracking the effect on Canada of Mr. Trump’s executive order on immigration. In January, as the order stranded people at airports, upended immigration plans mid-flight and provoked global condemnation, Prime Minister Justin Trudeau of Canada took to social media to restate the country’s open-door policy.

“To those fleeing persecution, terror & war, Canadians will welcome you, regardless of your faith,” Mr. Trudeau wrote on Twitter. “Diversity is our strength.”

The Quebec crossing is the most active, Corporal Gagnon said. 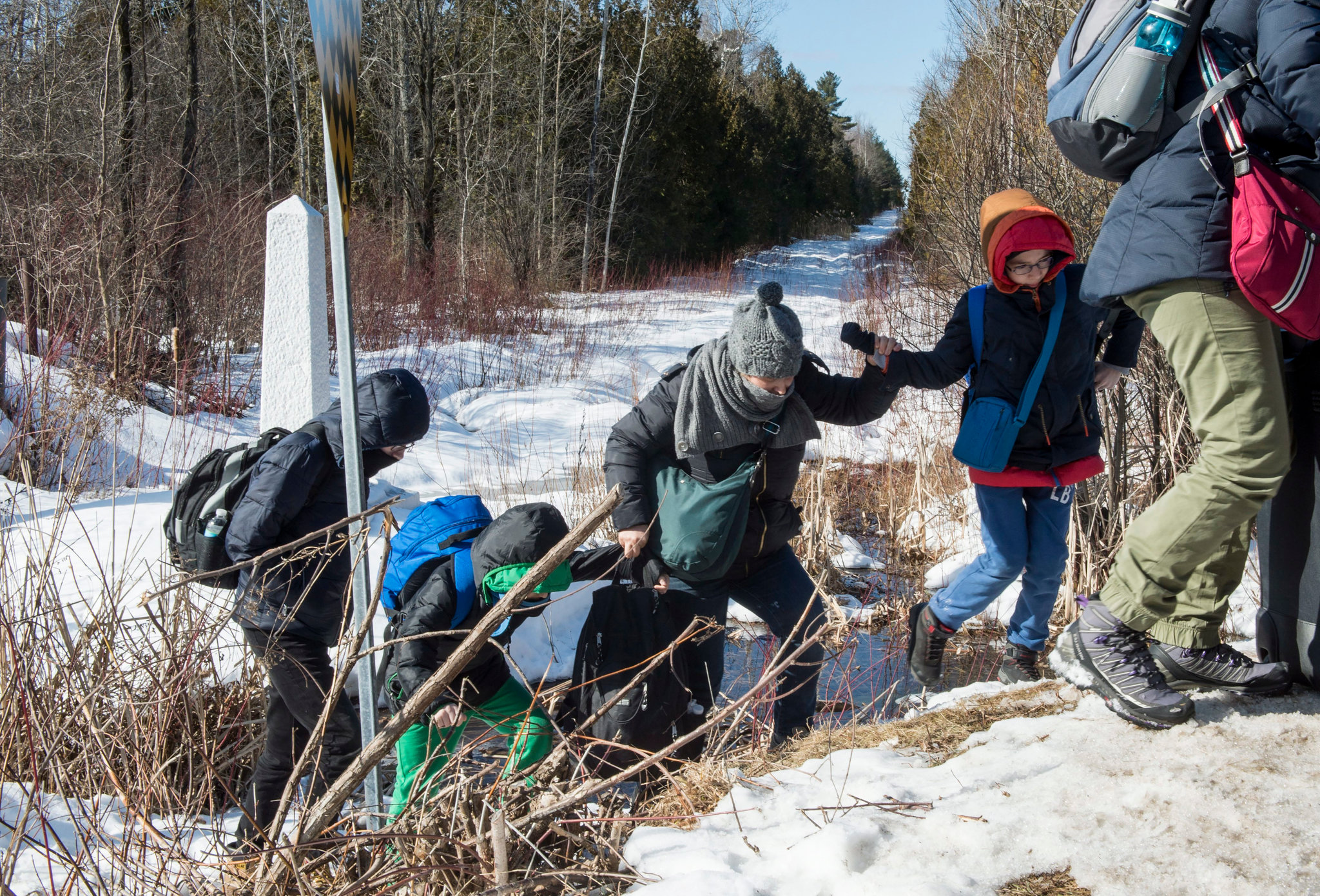 A family crossed the border into Canada from the United States on Monday near Hemmingford, Quebec.CreditPaul Chiasson/The Canadian Press, via Associated Press.

This month, a Times report noted that over the last couple of years, a small number of people had been crossing the border at Manitoba from the United States and then filing for asylum.

But as the atmosphere of fear and uncertainty grows as immigrants fear arrest on “any corner” in the United States, refugee workers in Winnipeg say there has been a noticeable surge in border crossings.