SEOUL  —  Mason Richey, an American scholar in Seoul, has spent thousands of hours dissecting a vivid language that emerged in the latter half of the 20th century.  He recently presented academic findings on the frequency of phrases such as “the desperate shrill cry of a psychopath on his deathbed” and “the kingpin of hideous state-sponsored terrorism and human-rights tundra.”

At one conference, Mr. Richey recalls being interrupted during a presentation by giggles from the audience. “Sometimes,” Mr. Richey says, “I can’t believe I’m studying this.”  While military experts analyze North Korea’s nuclear and missile programs, a small group of academics is focused on a less-studied component of Pyongyang’s arsenal: its rich collection of over-the-top insults.

The scholars are applying high-powered mathematical tools such as negative binomial regressions and Jaccard coefficients to better understand the verbal abuse that Kim Jong Un dishes out to his enemies. In doing so, they are hoping to find some predictive pattern in put-downs like “imbeciles in the dumping ground of history,” “ogres keen on aggression and mass killing,” and “dotard”—an archaic word to describe a senile old man, which North Korea recently applied to President Donald Trump.

This highly niche field of academic endeavor boasts only a handful of devotees world-wide. And they don’t agree on whether Pyongyang’s taunts reveal anything about its intentions.  Mr. Richey spent three years reading and analyzing roughly 42,000 English-language articles published by Pyongyang’s famously vitriolic Korean Central News Agency between 1997 and 2006.

No other country in modern history has used such “persistent, consistent, belligerent” creative language, said Mr. Richey, a professor at Seoul’s Hankuk University of Foreign Studies who earned his doctorate in political philosophy and international security. “The rhetoric goes beyond repeated boilerplate stuff. They’re working at this,” he said.

Among others who have studied the subject: Timothy Rich, a professor of political science at Western Kentucky University in Bowling Green, Ky., has analyzed more than 60,000 pieces of North Korean propaganda to “uncover patterns in such sources that the naked eye misses.”

He compares KCNA articles to e-mail scams that offer quick riches. Both, he says, are skillfully crafted by their authors to increase the chances of getting the desired response from their targets. Frank Dowling, a “big data” analyst in Christchurch, New Zealand, spent years scraping North Korean media websites to build up a searchable private online archive of Pyongyang’s propaganda. 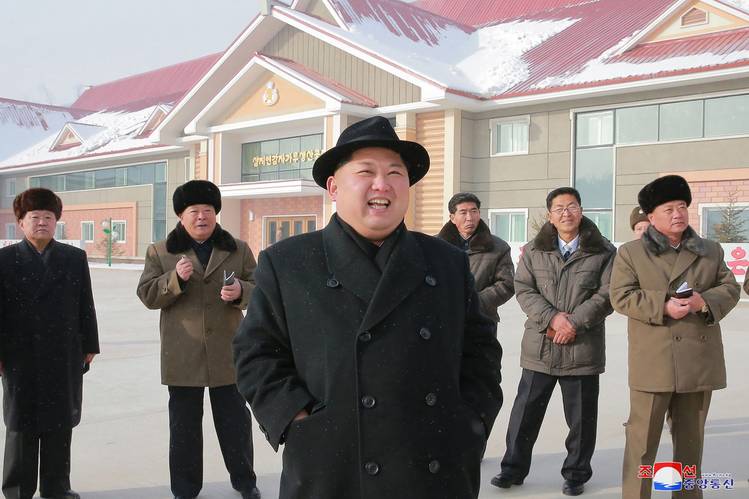 Michael Lammbrau, a scholar at Mercyhurst University in Erie, Pa., believes the invective can be analyzed to predict military moves by Pyongyang. He says that he developed a computer program utilizing machine learning to predict a nuclear test 73.2% of the time, based on North Korean threats. He has also produced a filter that he believes can identify harmless North Korean rhetoric—which doesn’t result in an actual military attack—with 96.7% accuracy.

“The North Korean regime barks very loudly before it actually bites its intended target,” Mr. Lammbrau concluded in a recent journal article. “Like a pitcher who unknowingly flinches before he throws a fastball, Pyongyang may unwittingly display certain patterns before it launches a military strike.”

Martin Weiser, a graduate student in Berlin, isn’t convinced that KCNA’s vitriol is so calculated. He has been building up a database of North Korean articles for years, and suspects that Pyongyang’s propagandists are actually very disorganized, and that some of their turns of phrase are the products of sloppiness.

“The level of propaganda is too naive and the standard of writing too low,” he wrote in a memoir. Michael Harrold, another Briton who worked for North Korean state media around the same time, described an unusual process that seemed to place more focus on punctuation than on the words used to translate the bombastic messages.

“I would sit and discuss the position of a comma for half an hour—they were that detail-oriented,” said Mr. Harrold, 55 years old. Mr. Richey’s research began in 2010, when, he says, there had been no empirical research done on why the regime uses so much bellicose rhetoric.

After publishing the findings of his first three years of work in the academic journal of the U.S. Army War College this year, Mr. Richey joined with Natalia Grabar, a computational linguist in Lille, France, who grew up bombarded with Soviet propaganda during her childhood in Ukraine.  For Mr. Richey and Ms. Grabar’s computer-powered analysis, algorithms first sort North Korean news articles based on their themes—some are about kimchi production, others are about nuclear holocaust.

Then, the algorithm uses “natural language processing” to detect possible disparities in the enormous corpus of text that North Korea churns out—105,788 articles, in the case of their research project.  After years of studying the verbal missiles, Mr. Richey has detected certain patterns.  “You can get a sense of how angry they are based on how many adjectives and adverbs they put before a term,” he said.

Some of North Korea’s barbs appear to hit their mark. After North Korea called Mr. Trump an “old lunatic,” the president tweeted last month: “Why would Kim Jong-un insult me by calling me ‘old,’ when I would NEVER call him ‘short and fat?’ ” Since then, KCNA has used “old lunatic” in at least nine articles to refer to Mr. Trump.

How a Dorm Room Minecraft Scam Brought Down the Internet