The Supreme Court ruled that oil and gas exploration near the community of Clyde River cannot go ahead.

The unanimous decision stated Canada failed in its duty to consult the tiny Inuit hamlet about the impact of seismic testing near their community.

The court heard the case in November.

Jerry Natanine, former mayor of Clyde River, said on Wednesday he is grateful for the outcome of the “seemingly impossible case”.

“Justice is on our side. We’re fighting for our life, our way of life.”

The legal fight dates back to 2014, when three energy companies received authorisation from the National Energy Board (NEB), a regulatory agency, to undertake a five-year offshore seismic survey for oil and gas under the ocean around Baffin Island.

The northern community of under 1,000 people relies heavily on hunting and fishing for both food and trade. They also had established treaty rights to hunt and harvest marine mammals in the area.

The community was concerned the seismic testing, which uses loud noises, would harm the marine life they depend on, a worry confirmed by the NEB.

Greenpeace Canada also championed the cause, including funding some of the legal fees. 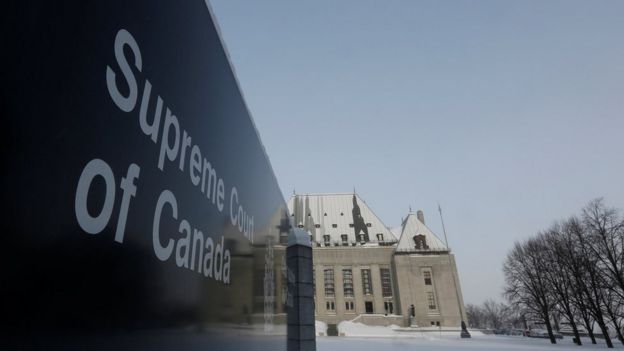 In the Clyde River ruling, Canada’s highest court found that while Ottawa holds ultimate responsibility for ensuring that consultations with indigenous communities are adequate, it can rely on the NEB’s process to fulfill that for energy-related projects.

But it found that the NEB’s process fell short in this case.

While NEB held consultations with the communities, the court noted that residents “asked basic questions about the effects of the survey on marine mammals in the region, but the proponents were unable to answer many of them”.

It also noted documentation was difficult to download due to the size of the files and that only a fraction was translated into Inuktitut, the local language.

Mr Natanine said that Clyde River residents are not opposed to development but want a frank discussion and negotiation on the dangers and compensation.

The Clyde River case was heard alongside that of the Chippewas of the Thames First Nation.

The community in southwest Ontario took legal action over Enbridge’s Line 9 pipeline, saying the Canadian government failed to properly consult with them over the plans to reverse the flow in an existing pipeline and expand its capacity.

In that case, the Supreme Court ruled that the community was adequately consulted on Enbridge’s plans.