Each week, Canada Today mixes the Times’s recent Canada-related coverage with back stories and analysis from our reporters along with opinions from our readers.

Sam Sifton writes a Times newsletter, his recipes appear on Sundays in The New York Times Magazine and, because he apparently doesn’t have enough to do, he is also the editor in charge of all things food related at the Times. He recently noticed that there was growing ferment on Twitter about the new restaurant at Montreal’s government-owned casino and asked me to look into it. The product of that request appeared in the Food section this week.

Over the past couple of decades, the number of innovative locally owned restaurants has grown in Montreal and other Canadian cities, and they are gaining national and international recognition. So there was dismay among many of the chefs at those restaurants when the province’s lottery agency, Loto Quebec, which oversees the casino, turned to an acclaimed chef from Paris to create a signature restaurant for its casino. Adding to the insult, in their eyes, it appears that the lottery agency is heavily subsidizing the L’Atelier de Joël Robuchon.

Aside from being a look at the highly competitive world of restaurants, the story raises questions about the highly uncompetitive world of government agencies that hold monopolies. In several provinces, such operations are in charge of alcohol distribution and sales. And the local authorities that operate most airports across Canada are a variation on this theme.

The arrangement has its advocates as well as critics. Ontario’s liquor board, for example, argues that its near-monopoly brings a uniform level of service everywhere, even in small towns. Some of the agencies claim to keep prices down while providing well-paying jobs. But in this case, critics of Loto Quebec charge that the agency has been opaque in its operations and unaccountable, and that it is undermining efforts by other parts of the government to promote Montreal as a restaurant destination for tourists.

Montreal has indeed been successful in promoting itself as a dining city. As I travel around Canada, the rise of restaurants and new dining neighborhoods has been impossible to miss — even if The Times’s expense policies discourage me from eating at many of those new places.

Does your community have a restaurant you think is particularly memorable or outstanding? We’d like to know about it and we also want to know why you think that’s the case. And it doesn’t have to be like L’Atelier de Joël Robuchon with its 200 Canadian dollar tasting menu. We’re just as interested in humble coffee shops, diners, even chip stands. Please let us know: [email protected]

Two Dimensional He was, Dan Levin wrote, “the consummate politician: tall, dapper and always willing to be trotted out for public appearances, even when someone licked his face.” But Canada’s Department of Global Affairs has told its diplomatic missions in the United States to put their life-size, cardboard cutouts of Prime Minister Justin Trudeau into retirement. 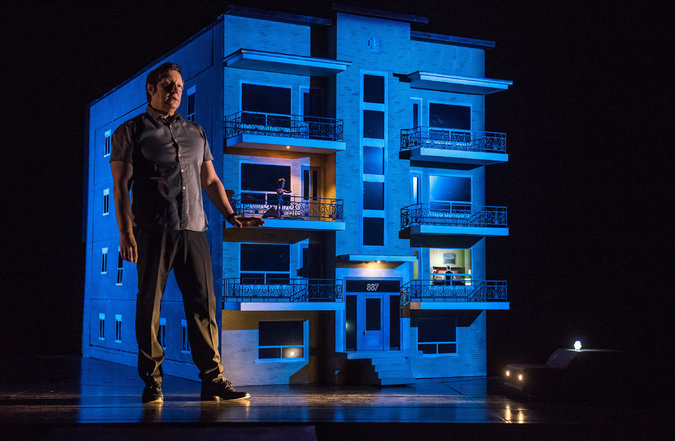 On Stage Following “Come From Away,” another Canadian theater production playing in New York has become an NYT Critics’ Pick. Alexis Soloski wrote that in “887” a “shabby apartment building becomes a cabinet of wonders.” The solo show is Robert Lepage’s memoir of growing up at 887 Murray Ave. in Quebec City during the 1960s. And, inevitably, that also brings in Quebec politics of that time.

Like most of Mr. Lepage’s work, there’s technological trickery, particularly a model of the apartment building. But Mr. Lepage’s sometimes tangential storytelling is what made the show for Ms. Soloski.

The play’s opening, she wrote, “is a little like being buttonholed by a guy at a party before you’ve even had a drink, but his line of chat is so persuasive that eventually you forget about the drink, the party and pretty much everything except the world he’s creating with his words,” she wrote.

Mr. Lepage also met Ms. Soloski in his dressing room for an interview. Here’s his reply when asked if he still believes that Quebec should separate from Canada: “I’m perfectly bilingual. I spend most of my life expressing myself in English, but I’m a French Canadian; I have a different understanding of what English-speaking Canadian culture is. It’s difficult for me to say it’s not my country. So it’s a bit of a paradox. I’d say I’m a lukewarm separatist. I get a lot of flak for that. Separatists say that I’m a wimp.”

Shoe Leather Many of Susanne Craig’s stories have appeared on the front page of The Times, most notably after she obtained portions of President Trump’s tax returns. But her first front-page appearance came in The Calgary Herald, her hometown newspaper. And it involved an unusual reporting experience that Ms. Craig has recounted for Times Insider.

Insured A recent study found that people with cystic fibrosis in Canada have a median life span of 50.9 years, far higher than the 40.6 years for their counterparts in the United States. Aaron E. Carroll, a professor of pediatrics at Indiana University School of Medicine, looked into the reasons behind that difference for The Upshot. There are many factors, but he concluded that Canada’s universal health care is likely one of them. It also, he argues, may explain why the United States, which once was a leader when it came to the life spans of people with cystic fibrosis, is falling behind on several health indicators.

“It’s easy to repeat the mantra that the United States has ‘the best health care system in the world,’ Dr. Carroll wrote. “But a system must be judged on its overall outcomes, and when that is done, America often comes up short.”

Here are some other articles from The Times over the last week, not necessarily related to Canada and perhaps overlooked, that I found interesting:

— With enough money and time it may be possible to revive the woolly mammoth or other extinct animals. Joseph Bennett, an assistant professor and conservation researcher at Carleton University in Ottawa, is asking if it makes more sense to use funds and science resources to save endangered species rather than trying to reverse the past.

— Old car tires often come back as floor mats. Now a maker of very, some might say absurdly, expensive watches is recycling tires from Formula One racing.

— People who walk a minimum of 10,000 steps per day may have to up their game. A British study suggests that 15,000 steps is a better target.