Mom, Fiona, and children, Fearghus, Lexy and Kenzie are coming from across Canada to take part in the Games

The conversations around the Vincent family table when the kids were growing up certainly had a theme: paddling.

Parents, Mike and Fiona, and children, Fearghus, Lexy and Kenzie, all have a list of awards, medals and achievements when it comes to water sports.

But the Canada Summer Games hold a special meaning for the family — it’s a reunion.

“This is the parents dream, to be able to be here, see all of your kids involved in something that is so uniquely Canadian,” said Fiona, 53.

Each of the siblings is representing a different province in a different way at the games.

Fearghus, 22, is a coach for Yukon’s Canoe Kayak team, he currently lives in Whitehorse. Lexy, 20, is competing as an athlete for Ontario’s Canoe/Kayak team, she lives in Ottawa. Kenzie, 24, is an Athletes Village Coordinator with the Host Society, he lives in Winnipeg.

Of course, Fiona is representing as a proud parent and for Saskatchewan because she lives in Regina.

“We are pretty excited that we can all be together… We’ve got four provinces represented here,” Fiona said, adding her husband, Mike, wanted to be there but had to stay in Regina due to unforeseen circumstances.

“We can collectively come together, still be unique but part of the same event.”

Not only can the family be together, they can also support Lexy as she attempts to take a medal. She competed in the Games when she was 16 and won bronze for Saskatchewan.

But there’s also some rivalry between the siblings.

“I would definitely say there is some healthy competition going on,” Kenzie said with a laugh. 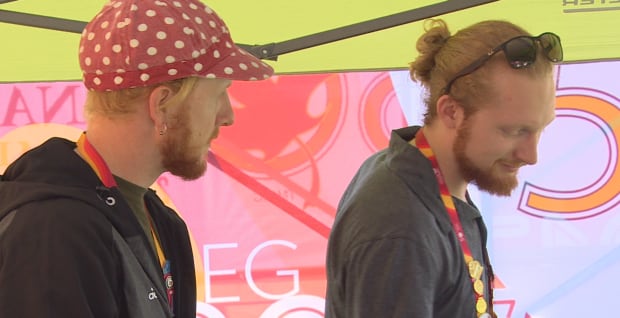 Brothers, Fearghus, left, and Kenzie Vincent, say the polka dot hat is a family tradition and now it gets recognized by paddlers around the world. (Cliff Simpson/CBC)

For spectators hoping to catch a glimpse of the famous paddling Vincents, all they need to do is spot a polka dot hat.

“It started with my grandfather. He started wearing them to keep track of my dad and his siblings at like country fairs and stuff like that, and it kind of went over to the paddling world,” Kenzie said.

For mom, Fiona, the memory of the Games will last forever, seeing her kids come together supporting the sport the family loves.

“I think it’s awesome. I think it’s every parent’s dream that their kids will participate in something that is healthy and outside,” she said.

Funeral Homes Warned to Be Prepared in Advance of Possible Pandemic