‘This is Canada. Everyone was so polite and nice and accommodating,’ passenger says

The Transportation Safety Board is investigating after an Air Canada plane arriving from Halifax with 112 passengers slid off the runway early Saturday at Toronto’s Pearson International Airport in heavy fog and rain.

No one was injured in the incident involving Flight 623, which occurred shortly after midnight, according to Peel Regional Police and the Greater Toronto Airports Authority.

Air Canada will no longer call passengers ‘ladies and gentlemen

The plane has been towed off the runway and GTAA officials are inspecting the runway. The airports authority said cleanup and repairs would begin shortly.

Passenger Paul Varian told CBC News the incident appeared to have damaged the undercarriage of the plane.

“The whole of the undercarriage on my side, on the left-hand side, when we took a look while we were deplaning, was destroyed. The tires were completely gone off the wheel,” he said.

Varian said passengers were calm throughout the incident and the flight crew was helpful as passengers got off the plane.

“This is Canada. Everyone was so polite and nice and accommodating.” 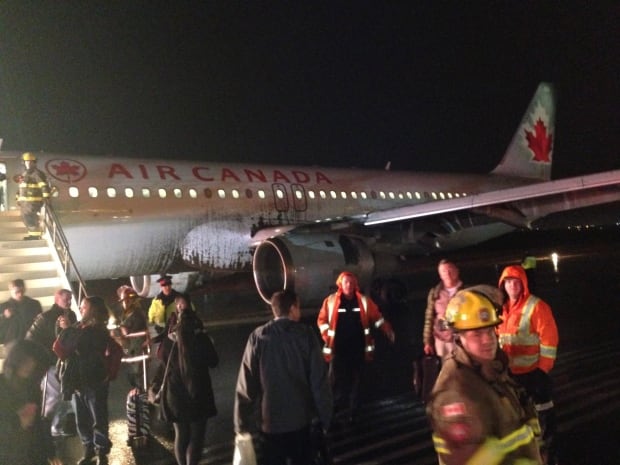 Isabelle Arthur, media relations manager for Air Canada, said the aircraft’s landing gear left the runway for a short distance before it returned to the runway, and passengers were taken in buses to a nearby terminal.

She said the airline is relieved that nobody was hurt.

“Our focus was our passengers that were quickly bused to the airport and met by and tended to by a team of Air Canada employees and managers,” Arthur said.

“We have provided them with hotel accommodations and limousines for those wishing to head home.”

The side of the aircraft, an Airbus A320, was covered in mud after the incident.

“We apologize for the inconvenience and will be in touch with our customers to follow up on the event and ensure they are all well taken care of,” Arthur said. 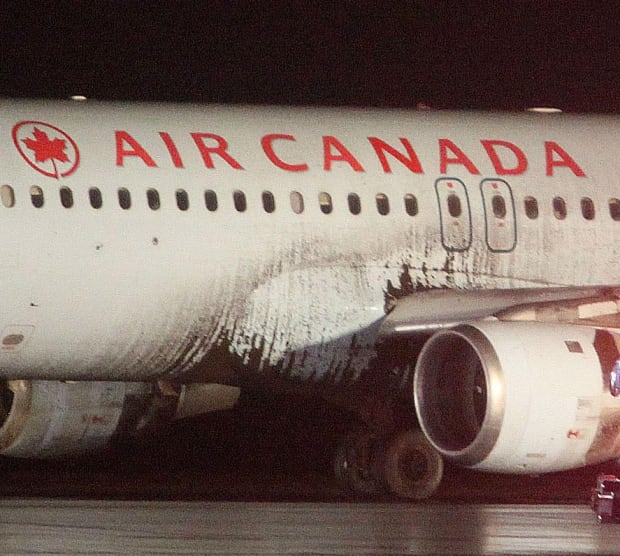 She said luggage would be delivered to passengers once officials finish reviewing the incident. According to witnesses, passengers disembarked while on the runway.

Julie Leroux, spokeswoman for the Transportation Safety Board, said in an interview from Gatineau, Que., that two investigators from the TSB were on the scene.

She called the incident a “runway incursion” and said there are “no reported injuries for now.” 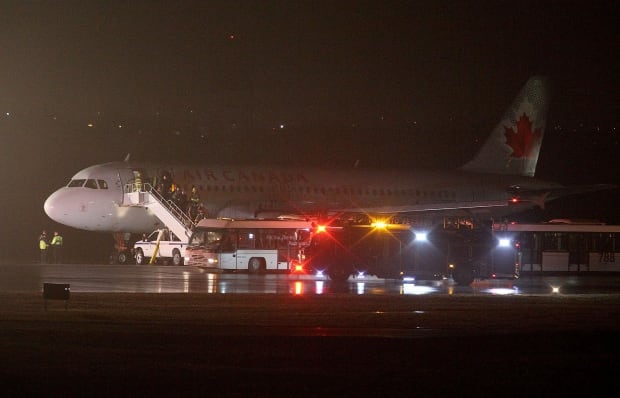 Leroux said it is yet not known why the aircraft slid off the runway. She could not comment on the conditions encountered by the plane upon landing.

Mississauga Fire and Emergency Services, along with Peel Regional Paramedic Services, were called to the scene.

Const. Harinder Sohi, spokesman for Peel police, said the pilot was able to get the plane back on the runway.

Natalie Moncur, spokeswoman for the Greater Toronto Airports Authority, said the incident was not expected to affect any other flights.

Passenger Varian, who didn’t know the plane had left the runway until he was in the terminal, said the flight was delayed leaving Halifax. He said the clouds were quite low during landing in Toronto and the landing gear “blew.”

“We landed heavily, nothing that I would say was traumatically heavily. We just landed quite heavily on the tarmac and the plane lurched a bit to the left. Then the pilot applied heavy brakes. That threw everyone forward a bit,” he said.

‘Black residue on my window’

The plane came to an abrupt halt on the runway.

He said that after about an hour and a half, the passengers disembarked and were taken in buses back to the terminal.