Prime minister blames others for campaign promises not kept

One of the (only) inconveniences of majority government in a Westminster Parliament is having precious few to blame for your misfortunes. There’s a reason they call it an “elective dictatorship.”

Undaunted, Prime Minister Justin Trudeau elected Tuesday to hide in the opposition’s shadow while defending his record at an end-of-session news conference.

Trump and Kim Can Learn a Thing or Two From Singapore

A message to the next government on jail reform

The deficit he promised on the campaign trail? Not his fault. His pledge to end the first-past-the-post vote? The opposition — and their minority of votes — made me ditch it.

It was a weak — and bog standard — political display from someone who pledged to play the game of politics differently.

Perhaps knowing he was in for a media barracking for these and other failings, Trudeau opened his news conference by pointing to the fact he was having a news conference (subtext: not like that secretive Stephen Harper), even thanking the media for their work.

Having been a media wrangler for nearly five years, I totally see the value in rubbing the media’s belly.

They like it, and it usually works. But judging from the Twitter banter coming from the parliamentary media Tuesday, Trudeau’s act is starting to flop.

In my experience, what starts as chippy social banter turns into sour copy before hardening into an Ottawa mindset.

The next step is usually the feeling in government that nothing you’re doing or saying is registering with the public because the cynics in the media aren’t giving you a fair shake.

If you’re lucky, or aren’t a Conservative, this feeling usually takes a few years to manifest itself. Once it does, the task becomes finding ways of getting “around” the media to deliver your message straight to the people.

This was a fool’s errand until the invention of the internet.

Even then, it produced limited returns (hello, 24-7!) as long as the mainstream media was in rude health.

But with the continued and rapid decline of the media — as evidenced by a recent demand for an industry bailout from a media lobby group — the prospect of unfiltered government propaganda is suddenly a very real thing.

It might explain why polls continue to show a deep affection for Trudeau among younger Canadians, who are more likely to get their news from their various social media feeds than a newspaper or broadcast. 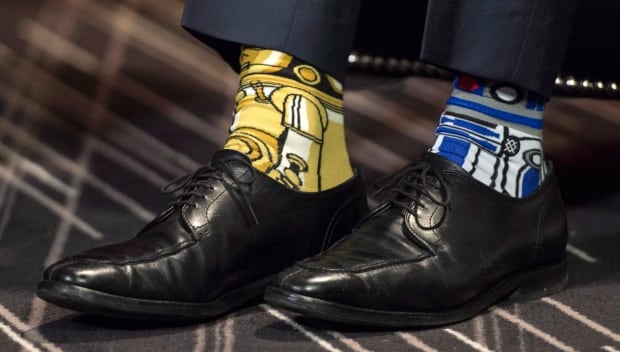 Trudeau has found favour with younger Canadians, perhaps in part because of his penchant for funky socks. (Paul Chiasson/Canadian Press)

Now, there are other factors that could explain it — not least among them the fact that younger Canadians are more likely to favour things like the legalization of marijuana, the serious pursuit of environmental policy and funky socks on the feet of their political leaders — but the breaking of the accountability loop of journalism is certainly a part of it.

Critical media coverage loses its impact if no one reads it.

This is the phenomenon we see in the United States, where a savage media is not yet denting President Donald Trump’s core supporters, who don’t often visit mainstream news sites.

As long as Trump keeps tending his partisan flowers with appearances on programs like Fox and Friends —the hint is in the name — he can survive in the White House.

Justin Trudeau tends to his garden, too. A look at his social channels reveals a carefully thought-out program with a fairly wide readership and viewership.

As taxpayer-funded official photos of Trudeau playing with children flash by, we are shown the text: “More money for 9/10 Canadian families. Tax free.”

Lest we have no doubt this is an advertisement, the caption to the montage reads: “It’s the long weekend that kicks off the summer — and we’re making it easier for your family to get out and enjoy it.”

The Trudeau PMO doesn’t consider the piece an ad.

When I put the question to Kate Purchase, Trudeau’s director of communications, she replied: “We don’t consider something an ad unless it’s truly a paid piece — I’d say that unless it’s a paid promotion on social media, we would just consider it a message piece.”

In other words, it’s not an ad if the taxpayer pays to shoot, write and edit it, only if the taxpayer buys ad space for it. No wonder the Liberals put so much effort into expanding the prime minister’s audiences on social channels.

The Child Care Benefit “message piece” went to Trudeau’s Instagram audience of more than 1.3 million followers and was viewed nearly 200,000 times. It was also seen by his 3.35 million-strong Twitter army.

Those are comparable — or better — numbers than many news outlets. And the Liberals can track who watches and likes the material to ensure other material is later sent their way.

I can’t blame the Trudeau PMO for its answer as to whether this is advertising. I used to give much the same answers to journalists when Stephen Harper practised the same tricks. Oh, how the journalists hated our attempts to end-run them.

Their criticism never really hurt us. In fact, the more we did it, the fewer journalists who called.

This was in part, I suppose, because quite a few were being laid off, but I could always count on a tough phone call from the no-nonsense and ultra-professional Bruce Cheadle of The Canadian Press, who knew the rules of government advertising better than I did.

And where is Bruce Cheadle now? He’s the director of communications to Scott Brison, the federal minister in charge of advertising rules. The paucity of stories on government advertising indicates no one is much interested in his old beat.

A cynic would say the Trudeau Liberals knew exactly what hire to make for the actions they were about to take. Real change, indeed.

US, Britain Urge Russia to Bring Those Behind Nemtsov Slaying to Justice