A Surge of Migrants Crossing Into Quebec Tests Canada’s Welcome

A Surge of Migrants Crossing Into Quebec Tests Canada’s Welcome

The crowd of asylum seekers who gathered the other day outside this city’s Olympic Stadium, their temporary home, hailed from across the globe. They had fled violence, poverty, persecution and, some say, President Trump, often with only a suitcase to their name and a wisp of hope that Canada will allow them to stay.

They are part of a new surge of mostly Haitian migrants who have illegally crossed into Quebec by the hundreds every day over the past several weeks, walking over a ditch at the end of a dead-end road in upstate New York. They are seeking to benefit from a loophole in a treaty between the two countries that allows them to make refugee claims in Canada if they do not arrive at legal ports of entry.

“I lost everything in Haiti, but now I’m afraid the U.S. will send me back,” said Jonathan Luima, 44, a Haitian migrant who arrived in the United States last year. “Canada is my only hope.”

This recent influx of asylum seekers poses a political and diplomatic test for the government of Canada’s prime minister, Justin Trudeau, as it seeks to balance its publicly compassionate statements toward refugees with a strict immigration system. 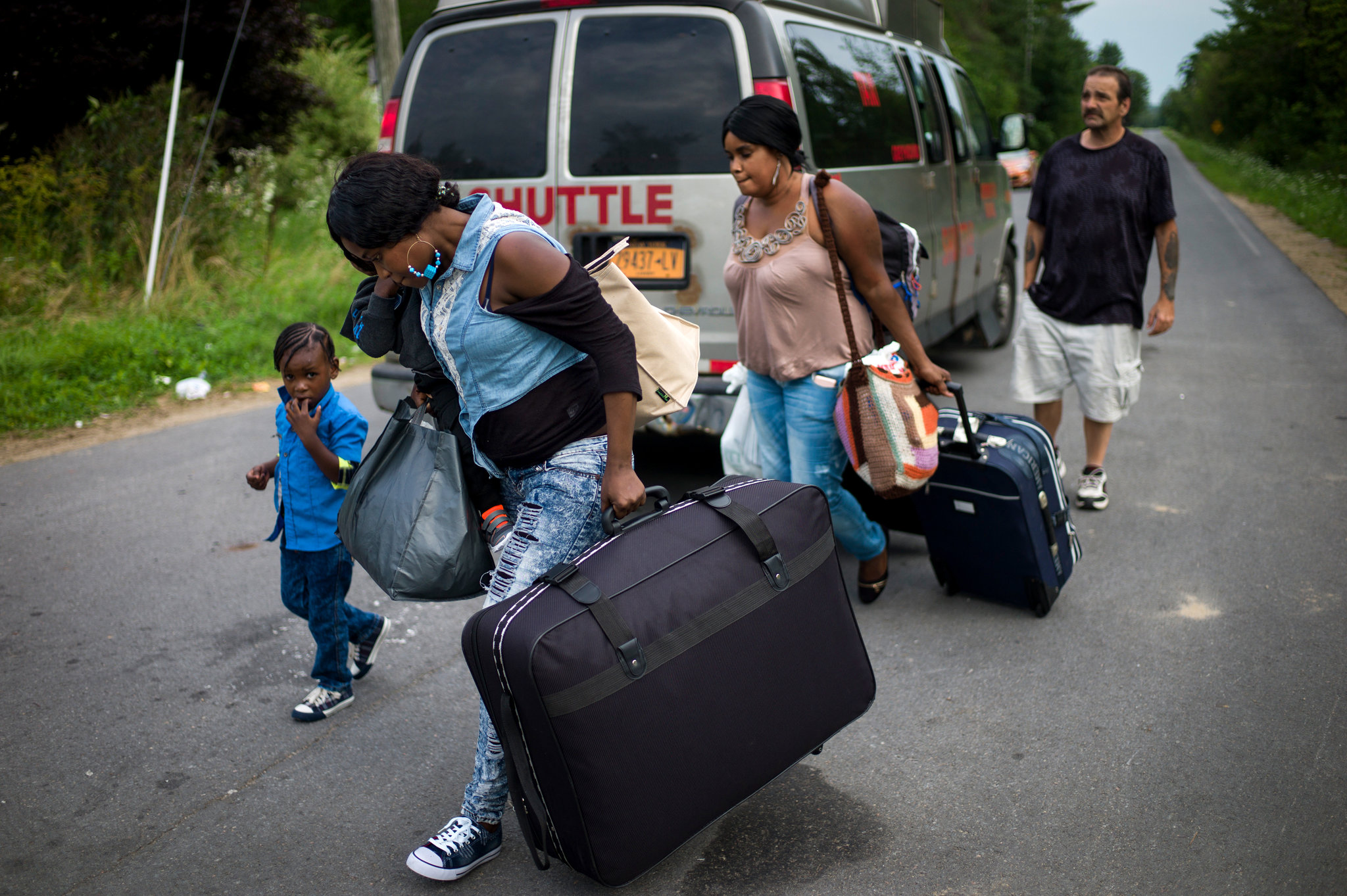 The Canadian government lifted a temporary protection policy for Haiti in 2014 and resumed deportations in March. And despite the widespread impression among the would-be immigrants that Canada is a safe haven, there is no guarantee they will be allowed to stay.

Canada is portrayed as very welcoming, but we’re not open to every kind of immigrants,” said Mireille Paquet, an expert on immigration policy at Concordia University in Montreal. “Being poor is not a reason to get refugee protection.”

Nonetheless, refugee advocates say the government is essentially encouraging people to come into the country — and to bypass the treaty — by setting up processing centers at popular illegal crossing points, and arranging for shelter.

The Canadian military announced on Wednesday that it would build a camp for 500 asylum seekers near the Quebec-United States border. Last week, the authorities opened the temporary housing center in the stadium, with space for 1,050 beds until September.

On a recent visit to the border crossing in Champlain, N.Y., taxicabs arrived at the dead end of Roxham Road practically every 15 minutes, stopping a few feet from a ditch that separates the United States and Canada. The passengers clutched their luggage, ignored a “no pedestrians” sign and made the short walk into Quebec.

Royal Canadian Mounted Police officers are supposed to warn those arriving here that they will be arrested for breaking international law by crossing illegally. But one officer instead greeted the migrants with a simple question: “Are you from Haiti?” 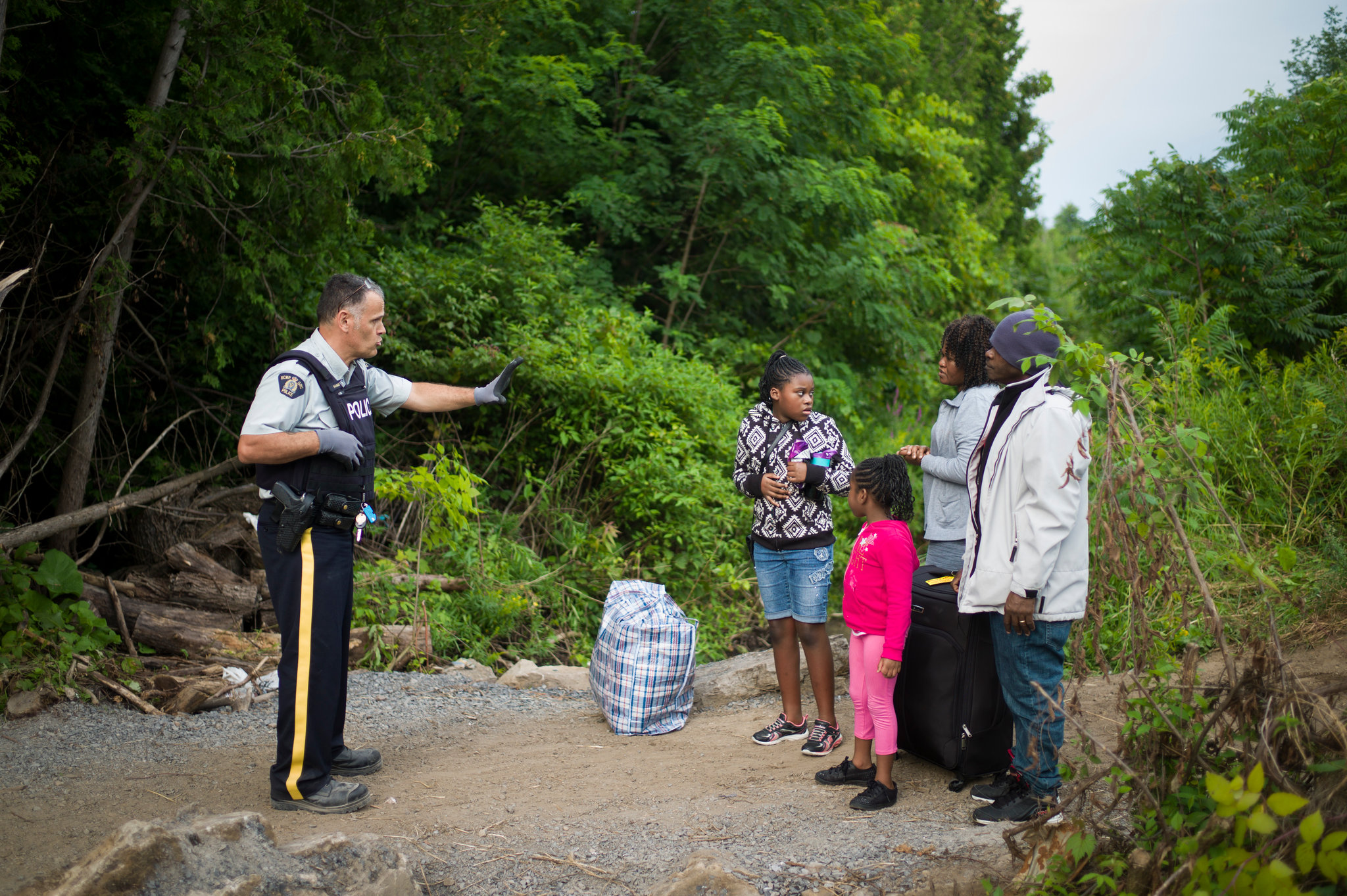 A Royal Canadian Mounted Police officer explained to asylum seekers who were about to cross the Canadian border illegally last week that they would be arrested. CreditIan Willms

Some of the migrants said concerns about the immigration policies of Mr. Trump had convinced them that Canada was their only option. Deportations of undocumented Haitian immigrants, though, were ordered to resume under the Obama administration.

Erloun Jean, 41, an undocumented Haitian immigrant who moved to the United States 17 years ago, arrived at the border with her American-born son and daughter. She said that the fear of being deported from the United States had spurred her to head to Canada, and that she could not bear to leave her children behind, even though it meant taking them away from all they knew.

“They said, ‘Mommy, I love my school and friends,’” she said as they walked toward Canadian soil. “But I feel I don’t have a choice.”

Around 1,500 asylum seekers crossed into Quebec in July, up from 781 in June, Quebec officials said. Over 200 are now arriving every day, according to the Canada Border Services Agency, which said many were American children accompanying their undocumented parents. 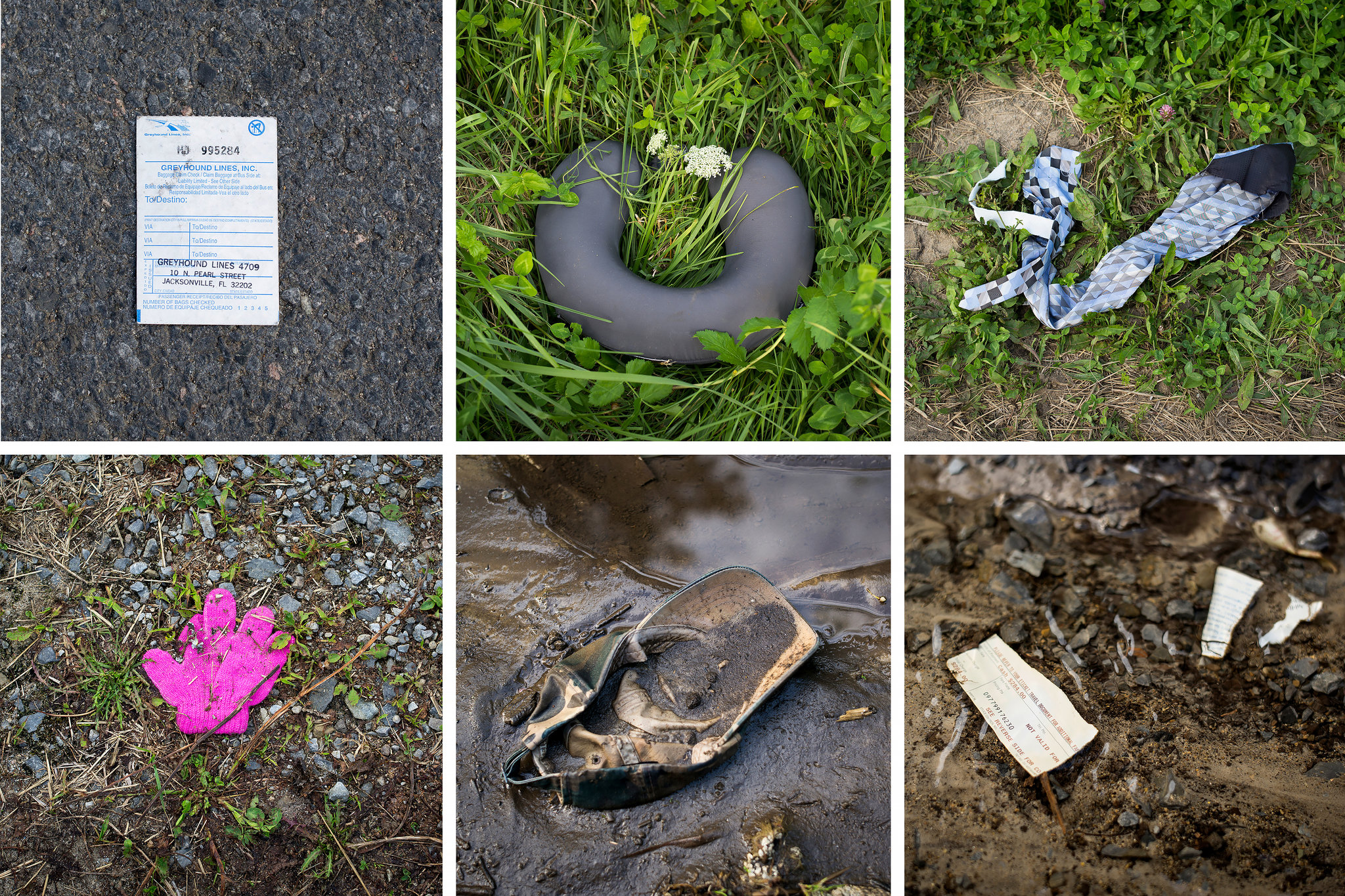 Objects left behind by migrants at a popular illegal crossing into Canada. Clockwise, from top left, a bus ticket, a pillow, a tie, an airline ticket, a hat and a child’s glove. CreditIan Willms

But Jean-Pierre Fortin, president of the Customs and Immigration Union, which represents Canadian border service agents, said agents had told him that the number of people crossing was much higher than the government’s figures.

Around 900 breakfast meals were distributed on Tuesday to asylum seekers held at the border crossing in the town of Saint-Bernard-de-Lacolle, he said, and agents have been brought in from across Canada to assist with processing refugee claims.

“In 18 years on the front line, I’ve never seen a crisis like this,” he said.

In May, the Trump administration announced that it planned to end a humanitarian program, Temporary Protected Status, that allowed 58,000 Haitians to remain in the United States after the devastating 2010 earthquake. That month, John F. Kelly, then the Homeland Security secretary and now the White House chief of staff, extended the program six more months, through January.

Haitian migrants and advocates in Montreal say the recent wave of asylum seekers was spurred by false information spread on social media claiming that Canada is automatically accepting people who have been safeguarded by Temporary Protected Status in the United States.

Last year, the Immigration and Refugee Board of Canada accepted 50 percent of refugee claims made by Haitians, the agency said. And according to the Canada Border Services Agency, since Canada resumed deportations of Haitians in March, 19 Haitian citizens have been sent back to Haiti, and 277 to the United States under the treaty between the two countries. 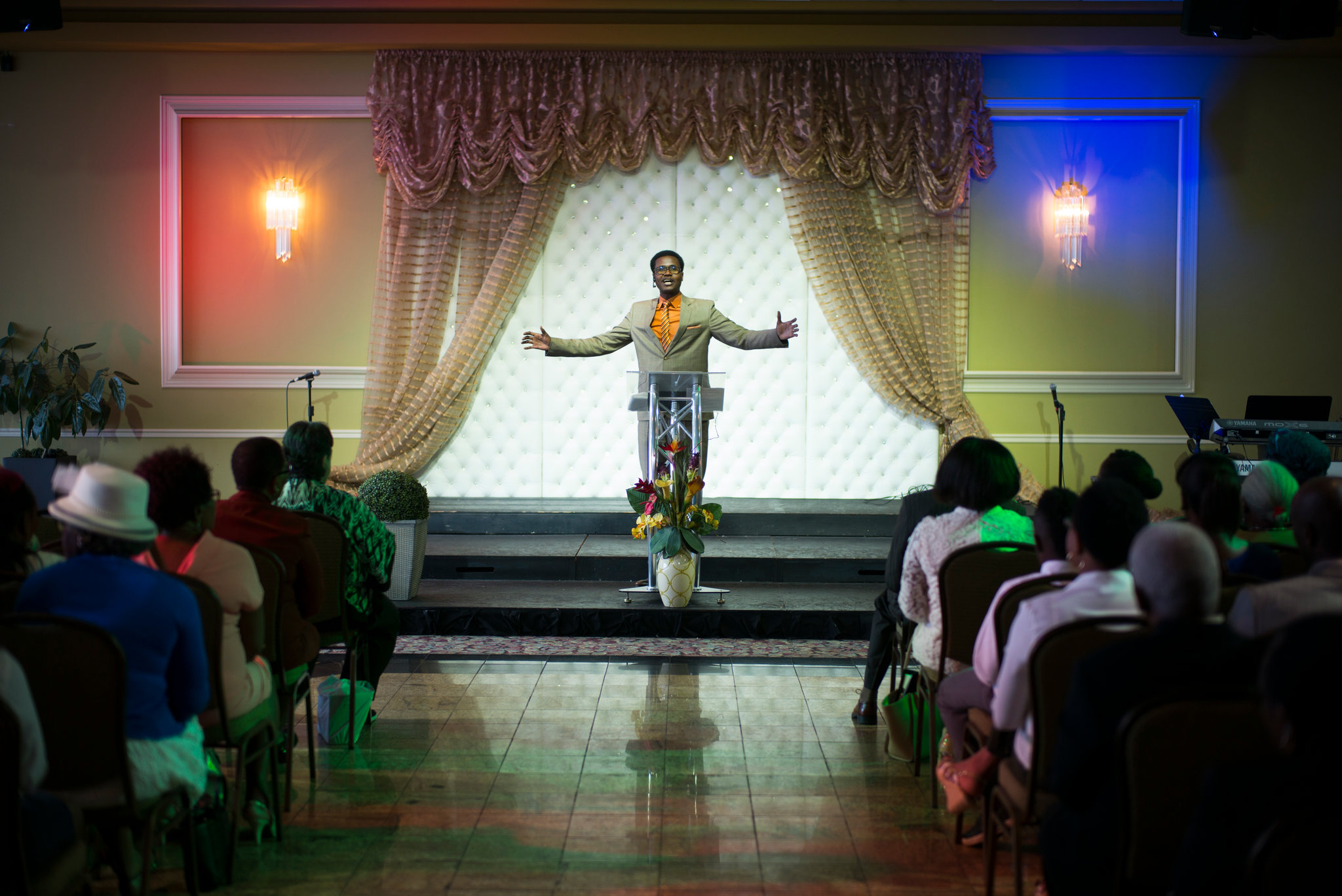 Wilner Cayo conducted a sermon at a Haitian Baptist church in Montreal. CreditIan Willms for The New York Times

Yet asylum seekers still believe they have a better chance in Canada. That impression has been bolstered by the polite treatment they receive once they cross the border.

“When you arrive, you’re not detained as a prisoner,” said Marjorie Villefranche, director of Maison d’Haiti, a Haitian community organization in Montreal.

Although they are formally arrested, the migrants get temporary papers, a bus pass and a monthly government stipend of up to 900 Canadian dollars (about $705), which can help pay rent while they wait for their refugee claim hearing.

The other day at Olympic Stadium, those hoping to get asylum talked about their painful journeys.

Ambali Motunrayo, 37, a Nigerian, said she had fled with her young daughter to escape her in-laws, who wanted the girl to undergo female circumcision.

Ahmed Iftikhar, 42, a political activist from Pakistani-controlled Kashmir, pointed to scars on his arm, saying Pakistani security agents repeatedly tortured him for his involvement in a political party that wants Kashmir to be an independent country. He fled to Brazil, then crossed in October with his wife and four children into the United States, where he was detained for more than a month, he said.

Afraid of the Trump administration’s attitude toward refugees, he said, the family crossed into Canada at Roxham Road in July. 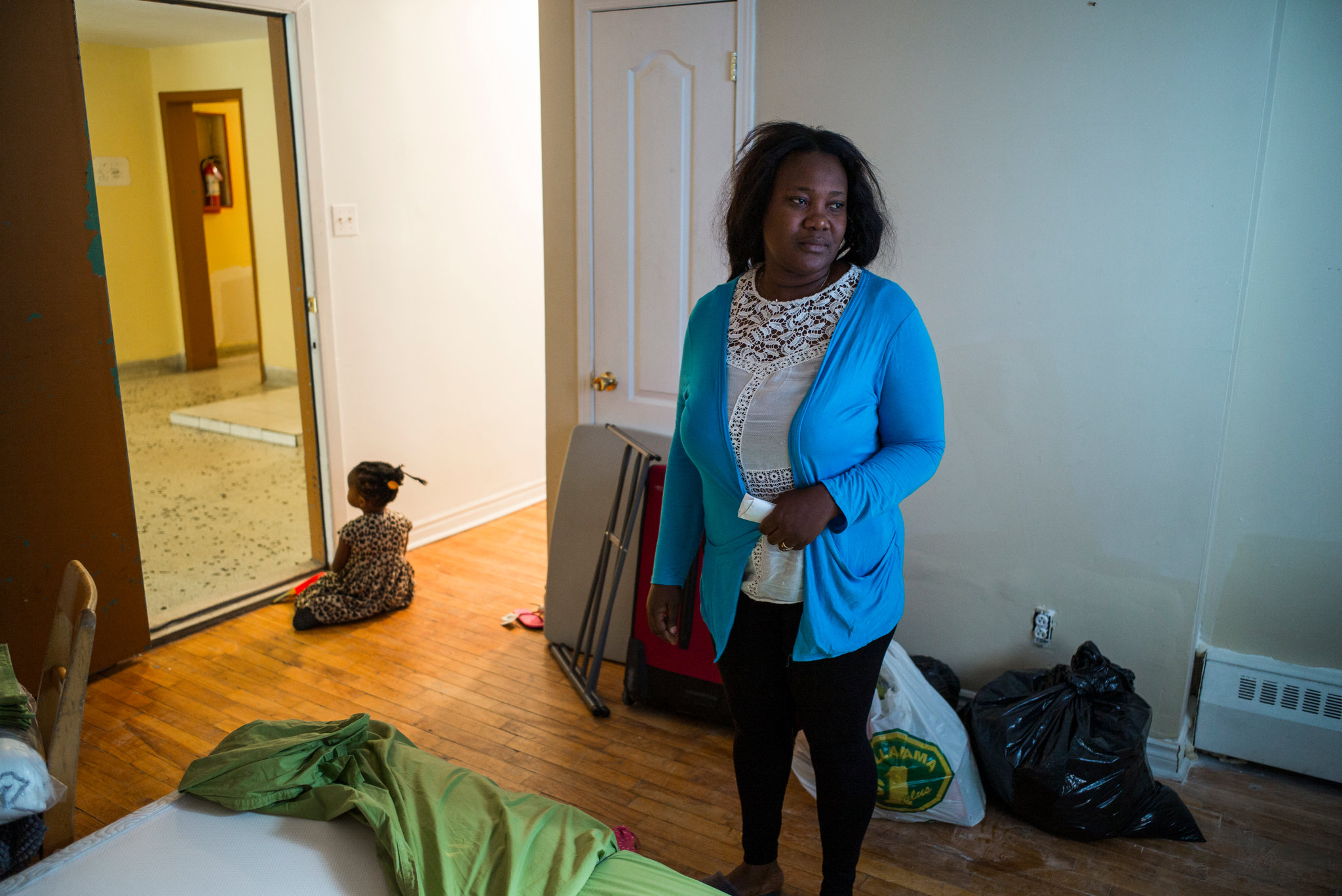 Ambali Motunrayo and her daughter, Mary, 2, in their new apartment in Montreal. They fled Nigeria after relatives wanted to perform female circumcision on Mary, Ms. Motunrayo said.CreditIan Willms for The New York Times