Amid reports that some Ontario businesses are slashing employee benefits and perks in response to the province-wide minimum wage increase, others are taking steps to embrace the change without passing costs onto staff. Chula, an east-end Mexican eatery, is exploring options like improving efficiency in the kitchen and moderately upping prices on hugely popular dishes.

“We did an analysis of all of our menus and all of our sales to see, what are the highest selling items that we can put up by the minimum amount,” to a price that would allow the business to cope with the new wage structure, says Bryan Burke, co-owner of Chula.

“The other thing we did was try to increase efficiency so we had to look at some of our menu items and say, ‘OK, this is an amazing cocktail [or] an amazing dish but it’s handled by four people and takes three hours of prep time. Let’s see how we can, without reducing the quality of it, change that from a three hour prep time to a two hour prep time.”

“I’ve opened two or three restaurants since May and we implemented the higher wages at one of them two months ago, almost as a test pilot for us,” he told CBC Toronto.

Even with advanced planning, Burke admits the change will be difficult for many small businesses, especially given the province’s proposed timeline.

“The reality is the minimum wage is great … we support the minimum wage going up,” he said. “It’s unfortunate the aggressive nature that the government has put forth on it. It’s going to be extremely hard on a lot of small businesses, especially if they aren’t prepared for it.”

Chula’s management is not alone, though. Other small businesses have chosen to increase prices as well.

“We went through every item on the menu here, every item and raised everything by 22 per cent. So for example, a $3 item is now $3.66, before taxes,” said Marie Coutu, owner of The Coffee Bar Inc in the Entertainment District.

She says that while staff have always been paid above minimum wage and they will get an increase, the hike will undoubtedly burden her business. Coutu admits she has had to cut hours for staff and the shop and is now struggling to pay her rent.

Coupled with more competition from big players popping up around her shop, it’s difficult for her to “see the light at the end of the tunnel.” “The 22 per cent that the minimum wage has gone up already doesn’t take into account the consideration of what I have to pay for my portion of Canada Pension Plan, Employment Insurance and then my WSIB goes up,” she explains.

“So as a business owner, I am at a bigger loss than just the 22 per cent that I have to somehow offset.” In a not-so-subtle jab at the province’s move, Coutu has introduced a new beverage called ‘The Kathleen Wynne Latte.’ It costs $22.

Trying to make it work

Tracy Molyneaux, manager of Coffee Public Toronto at College and Bay streets, says her restaurant has also increased prices because they too pay above the minimum wage and have had to compensate for that. “For a lot of people in Toronto, rent and groceries and bills are really expensive. So we really want to make sure that all of our employees can live comfortably and be able to afford all the necessities that they need,” says Molyneaux.

“It’s good that our province is recognizing that it costs a little bit more to live here,” said Tracy Molyneaux. (CBC)

Customers have taken notice of the jump in prices, but once it is explained that the increase is because of the higher wage, she says customers are “totally fine with it. “Not a lot of people have been very surprised by the increase, which is nice.” Molyneaux says she’s disappointed in the businesses that have chosen to cut benefits and things like paid breaks.

“We increased our wages for everybody and we’re a really small business. And people are ok with it. So I don’t understand why a large business such as Tim Hortons wouldn’t be able to do the same for their workers.” 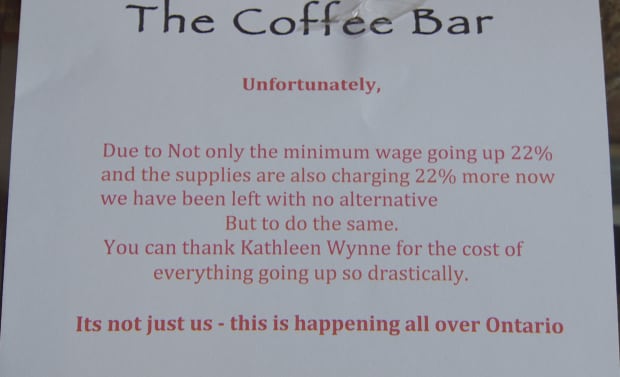 A letter to customers posted on the front door to The Coffee Bar Inc. (CBC)